YULI UNDER THE MICROSCOPE

Prior to the postseason series with the Minnesota Twins, the Houston Astros announced that impending free agent first baseman Yuli Gurriel would return on a one-year, $7M deal. The contract includes a club option for 2022 for $8M.

Gurriel was far from the biggest fish facing the market for the Astros -- that's still George Springer -- but first base was a legitimate question mark for 2021 and beyond. Taylor Jones has been uninspiring in his Major League cup of coffee and doesn't seem like a long-term solution, and nobody else in the system stands out either. That being said, Gurriel had the worst season of his career in 2020. Is it smart to depend on a 37-year-old to bounce back? Was 2019 an outlier or the beginning of regression? Could the Astros have found similar production for a cheaper price on the market?

Gurriel has one of the most unique batted ball profiles in MLB, making him a tough hitter to judge.

The dedication to contact comes with a consequence: he doesn't do a ton of damage.

Gurriel broke out for 31 homers in 2019, but remember, the baseball was "juiced" in 2019. There's evidence that the ball has normalized again in 2020, as home runs dropped 8% despite the entire season only being played in warm weather months. For most of his career, Gurriel has been a 15-homer type of hitter. He hit 6 homers in 57 in games in 2020, which would've put him in that 15-homer range over a full 162 game season if he kept at that pace.

That completely makes sense. Take a look at the ridiculous level of consistency here.

It's almost impossible to be that consistent. Simply put, what story do these numbers tell? First, both the Barrel% and Hard Hit% are well below league average, especially the barrel numbers. His exit velocity is above league average, but it isn't special by any means. Gurriel is an "old school" player. He doesn't elevate the ball a ton, and he doesn't strike out a ton. If he played in the '80s, he'd be a household name and multiple time All-Star.

Gurriel's BABIP in 2020 was .235, which is way below his career mark of .291. BABIP stands for "Batting Average on Balls In Play", so in his career, Gurriel gets a hit 29.1% of the time the ball is in play. Just based off of luck alone, there's about .060 points in batting average out there to be had. If Gurriel hit .292 instead of .232, people would feel a lot better on the surface. That's the bad luck part of it.

Gurriel actually had a career best mark in Zone Contact%, making contact on 94% of the strikes he swung at, about 3.5% better than his career mark, and a 3% improvement on 2019. Where his discipline profile changed was his ability to make contact on pitches OUTSIDE of the zone. Gurriel's Chase% was right in line with his career marks, chasing 34.3% of pitches outside the zone, but his Contact% on those dropped a whopping 6% from 75.4% to 69.6%. For a hitter as consistent as Gurriel everywhere else, that stands out as a massive difference. He also inexplicably swung at "meatballs", which are pitches right down the middle, only 62% of the time, 13% lower than last year. 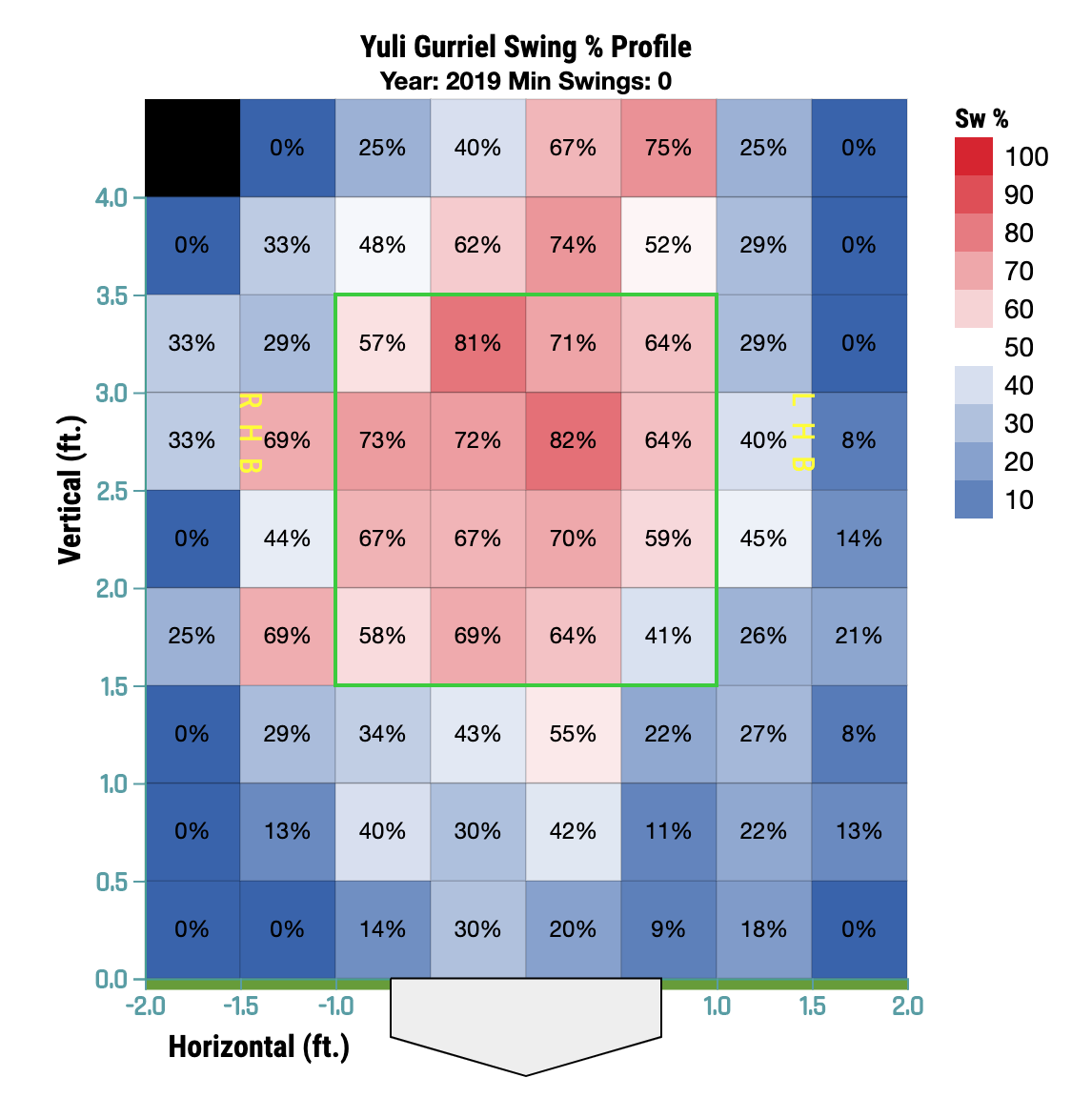 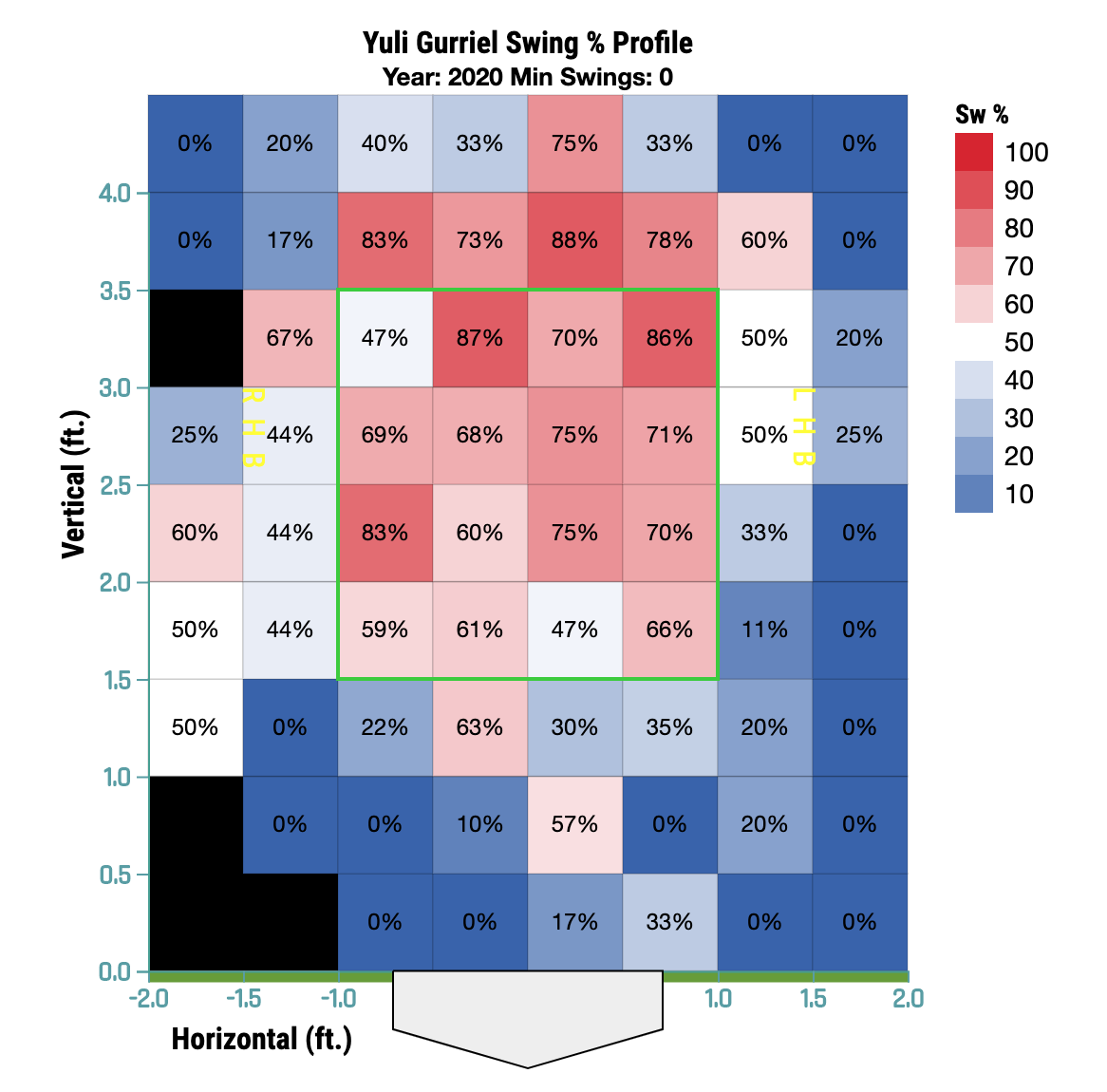 On top is Gurriel's 2019 swing profile. Right below it is Gurriel's 2020 swing profile. It immediately stands out how much more Gurriel swung at pitches up and out of the strike zone and on the outer-third of the plate. While his chase-rate was the same year-to-year, there's a clear problem area in 2020 compared to a spread in 2019. Pitches up in the zone also play up in velocity, which could show that Gurriel's hands are slowing down a tick if he's struggling to get to that pitch. He also swung at a lot of pitches on the outer-third, which isn't necessarily a pitch he's successful with. Gurriel makes his money on pitches on the inner-third, especially at Minute Maid Park with the short porch.

Luck alone will get Gurriel pretty close to the player that he was from 2016-2018. A refined approach, like telling himself to hunt pitches down and lay off pitches away until necessary, can get him to tap into something more. The neutralized baseball will keep him from being 2019 Yuli, but all-in-all, the contract for Gurriel looks like a good deal. He plays plus defense at first base, his numbers indicate he can still be a productive bat in the lineup, and the free agent market at first base isn't all that impressive. Carlos Santana and Anthony Rizzo -- who both had bad 2020s as well -- headline the market, with guys like C.J. Cron and Mitch Moreland representing the next lower dollar options. Rizzo and Santana would likely be more expensive than Gurriel. Cron and Moreland would be cheaper, but they're also not as good. James Click's first extension as General Manager looks to be the right move at first glance.

From Your Site Articles
Related Articles Around the Web
astroshouston astrosmlb

Ken Hoffman
It more of the same from the Houston Texans. Photo by Bob Levey/Getty Images.

Sunday afternoon provided a high-res snapshot of the state of Houston sports. The Astros, already assured of the best record in the American League, played a game they didn’t need to win. The Astros won, ho-hum, their 104th win of the season.

Meanwhile, eight miles away, the Texans, mired in last place with fan support dwindling, played a game they really needed to win. The Texans lost 34-24 to the Los Angeles Chargers in front of (giggle) 69,071 fans at NRG Stadium. The Texans really ought to stop saying the stands are packed. Every time a team punts, and cameras follow the ball skyward, there are thousands of empty seats on display. I know the NFL methodology for determining attendance, (total tickets sold, no-shows don’t count) but it just looks silly when the Texans announce 69,000 fans.

The Texans came close as usual before sputtering to another defeat. The Texans now stand at 0-3-1, the only winless team in the NFL. It’s the second time in three years they’ve started a season without a victory after four games. It’s telling to note that not one of the Texans opponents has a winning record for 2022.

In other words, the Texans have played four games they shoulda/coulda won. Shouda against the Colts, Broncos and Bears, and coulda against the Chargers.

Should/coulda four wins. Instead, none.

That’s the Texans. They’re in every game but can’t close the deal. Yeah, yeah, on Monday we hear, “the Texans are playing hard for coach Lovie Smith” and “they’re competitive” and “they’re a young team.” These are NFL equivalents of a participation trophy.

Sunday’s loss to the Chargers at NRG Stadium was straight out of the Texans playbook. Fall behind, make it interesting, lose. The Texans stuck to their script, timid play calling, momentum-crushing penalties (nine for 67 yards), self-inflicted drops, lackluster quarterbacking and Rex Burkhead on the field for crunch time. After one play where a Texan player was called for holding, the announcer said, “and he did a poor job of holding.”

Statuesque quarterback David Mills keeps saying “we’re in a good spot” and “we’re improving.” Statuesque as in he doesn’t move – or barely moves to avoid sacks. Sunday saw his first touchdown pass to a wide receiver. He’s now thrown four interceptions in the past two games. Let’s go to the tote board: 5 touchdowns, 4 interceptions, 4 fumbles, 11 sacks, qbr rating 28.5 – good for 28th in the league.

A bright spot, sort of. This was the first week the Texans didn’t cover the spread. They’re now 1-2-1 against Vegas oddsmakers, meaning you’ve won money if you took the Texans all four weeks. They head to Jacksonville next as early 6.5-point underdogs.

Meanwhile, Alabama’s brilliant quarterback Bryce Young, who will be available for the Texans when they draft first in 2023 (as Paul Heyman says, that’s not a prediction, that’s a spoiler), suffered a shoulder injury last Saturday. The Texans need to take out a Lloyds of London insurance policy on Young.