On the heels of a Western Conference Finals that many believed was theirs to lose before Chris Paul injured his hamstring, the Houston Rockets decided to shake up much of their roster this summer which came as a shock to many. With most expecting them to take a step back, Houston has a lot to prove going into the 2018-19 regular season.

Houston’s Las Vegas over/under is currently set at 56 wins and although they did lose some key pieces this summer, It’s hard to envision a nine-win drop off from last year. Chris Paul and James Harden provide a baseline of excellence that is so high, it almost doesn’t matter who the surrounding cast is. The ingredients are still there for Houston to be amongst the best in the league offensively, which will net them 50 wins on its own (given the history of top five offenses). Under Mike D’Antoni’s tutelage, the Rockets will be playing with a spread floor and a Hall of Fame facilitator in the game at all times. The losses of Trevor Ariza and Luc Mbah a Moute have little to no impact on this.

Defensively, there may be some slippage, but even so, it's unlikely they'll be worse than 15th in defensive rating. Last year, the Rockets managed to post an impressive 103.8 defensive rating which was good for sixth in the league. While Ariza and Mbah a Moute may have played a part in this, it can be argued that Chris Paul, P.J. Tucker, and Clint Capela played bigger roles and all three are still present. When healthy, Chris Paul is an All-NBA level defender at the point of attack. P.J. Tucker may be one of the more versatile forwards in the league, a true glue piece for Houston. And Clint Capela is one of the league’s premier switch-defending big men, with an improving ability to protect the rim. The additions of James Ennis and Michael-Carter Williams should help offset some of the defense lost from Ariza and Mbah a Moute.

As mentioned earlier, the Rockets have overhauled the backend of their roster quite a bit. 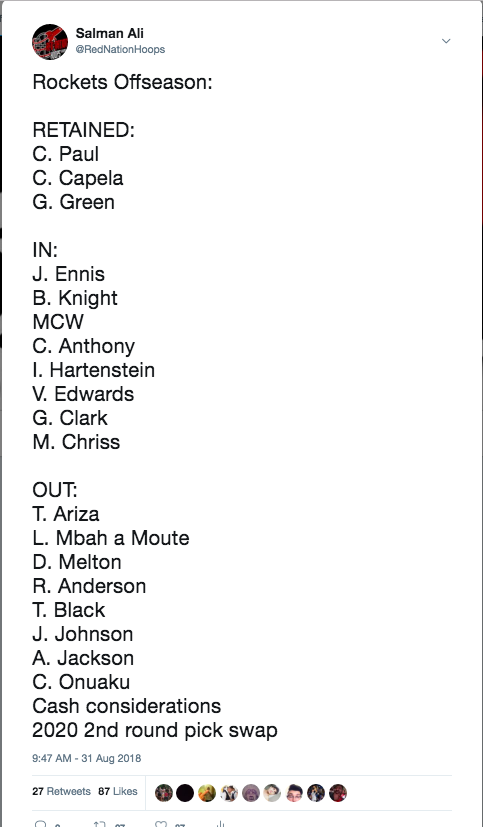 Houston has seven new players coming into this season, all with something to prove. No offseason addition has felt particularly safe for the Rockets this summer as all of them have questions marks to varying degrees. The additions that stand out are of forwards James Ennis and Carmelo Anthony. Ennis and Anthony are expected to pick up most of the minutes that were previously given to Luc Mbah a Moute and Trevor Ariza. The problem is both Ennis and Anthony have yet to be major cogs to a winning basketball team in over five years.

Ennis profiles to be a very similar player to Luc Mbah a Moute, who provided great minutes off the bench as a swiss-army knife level defender. The problem is he's never been asked to play the minutes or role he'll have to play for Houston. And while Anthony has had some promising returns early in preseason for Houston, he will still have to prove it through the course of an 82-game regular season and provide value for Houston in the playoffs. It's a tall order for both players.

The Rockets have taken on hefty reclamation projects by acquiring Michael Carter-Williams, Brandon Knight, and Marquese Chriss. Both Carter-Williams and Chriss were in danger of falling out of the league and Knight is coming off a significant ACL tear in his right knee. It's unlikely Houston will hit on all of these guys, but if they can get solid value out of one or two of them, that's solid enough return to make the gambles worth it.

Carter-Williams has been more than promising in his first two preseason games. However, other than his rookie year, the larger sample size paints the picture of a negative basketball player who's struggled to find a consistent role in the NBA. The argument could be made that Mike D'Antoni has the ability to bring the best out of these kind of players though. D'Antoni's system empowers players to play freely and to their strengths, which is what Houston hopes will happen with Carter-Williams. 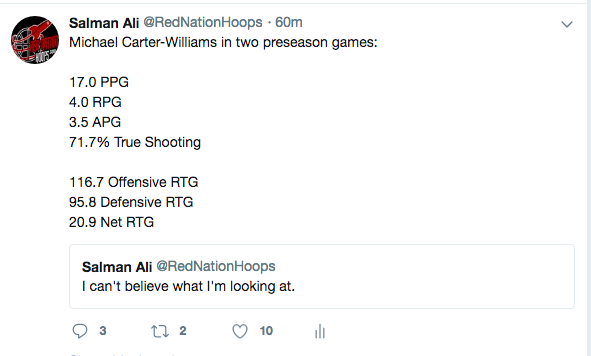 As for his role on the team, it seems the Rockets view Carter-Williams as a wing combo who can defend multiple positions and be disruptive. He’s also a good passer when given the freedom to handle the ball, which the Rockets seem to be allowing him to do in preseason. It’s unlikely he’ll ever be a starter level NBA player, but the possibility for him to be a decent reserve shouldn’t be dismissed.

Brandon Knight may be the most sure thing among this group of gambles. Knight is a career 15.2 PPG and a 35.7% 3-PT shooter and at points in his career, he was an elite shooter. The Rockets have had a backup point guard position available for years and if they simplify his role to scoring and spacing the floor, Knight can capably play reserve guard for this team. He may be a poor defender and his contract is gargantuan, but it doesn’t mean he can’t contribute.

The top-end of this roster is going to be asked to do a lot this season. With the losses of Trevor Ariza and Luc Mbah a Moute, players like P.J. Tucker and Eric Gordon will likely see a bump in minutes per game. Mike D’Antoni has said that Gordon will play starter minutes (forward to 3:15) this year. There’s even been talk of more three-guard lineups from the Rockets this year, with the possibility of Gordon starting.

Although both are a year older, James Harden and Chris Paul will be asked to carry out the same role and production they had last year for the team. That’s a high bar, but both are capable of it. The only question is whether or not the Rockets will opt to give both of them rest days throughout the season as a preventative measure.

The greatest place for upward mobility among last year’s group resides with 24-year old Clint Capela. It’s possible Capela gets better around the edges of his game (namely rim protection and passing out of pick and rolls), but the most obvious area of growth for him is the amount of minutes. Capela has played four seasons in the NBA, but has yet to play 30 minutes per game for an entire season. 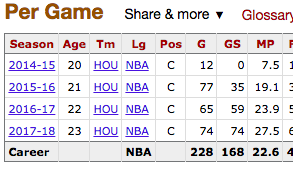 This year more than ever, the Rockets will be candidates to make midseason additions to their roster. Houston opted not to spend all of their taxpayer mid-level exception this summer (approximately $4.5 million remaining) and will have all of their first round picks moving forward. With all the talk about how much wing-depth they lost this summer, they have left themselves the possibility to improve significantly during the season.

Every year, good players shake loose from miserable situations and contenders tend to pounce on them. Among buyout destinations, Houston will be among the best teams and will likely have the most money to spend among contenders. The possibility for a significant trade also remains if the Rockets decide they need more than what the buyout market is giving them.

Other than that, it’ll be much of the same for this year’s Rockets. A lot of winning with unbelievably high expectations from ownership and the public.

Examining the ripple effect of an Astros-Verlander divorce

How any Justin Verlander move will have massive Astros implications

Jermaine Every
Let him cook! Photo by Tim Warner/Getty Images

The Houston Rockets are in the midst of a rebuild. Jalen Green and Kevin Porter Jr are studs. KPJ just signed a four-year extension with the team. Other guys like Jabari Smith Jr, Kenyon Martin Jr, Alperen Sengun, Josh Christopher, Tari Eason, and Jae'Sean Tate are really good pieces to surround Green and KPJ with. The only issue with this group: they're REALLY young! Tate is the elder statesman at 27 of the young nucleus. Most are barely old enough to buy a drink. Some still aren't old enough! They're a bunch of green bananas waiting to turn yellow to slightly brown and be ripe enough for consumption.

We need to give it time. Just like bananas, they take time to ripen. Coach Stephen Silas is known for developing young players. His most prized student is the star player for that team in South Oklahoma up 45. Number 77 for that team credited Silas with helping him realize his All-Pro potential while Silas was a part of the coaching staff there. To a man, all his former players credit him with being a positive influence on their careers. So why are fans in a rush to get rid of him?

When you look at the Rockets' record over the last few years, it's gross. Sure, they've been a lottery team the last couple of seasons, but that was by design. As part of the Chris Paul and Russell Westbrook trades, they gave away pick swap rights. Had they not been that bad, they wouldn't have been able to draft Green or Smith Jr. Those two guys are building blocks for the future, along with KPJ. Giving those picks away would've put this team further down the totem pole of developing themselves into a contender. Losing pays off when you can hit on high lottery picks.

If you give a chef dirt, bread, ham, molded cheese, and spoiled mayo, can you expect anything else but a nasty ham sandwich? How about if the chef was given a steak that is almost rotten, potatoes with root growth, and spoiled butter? Could you expect a better meal than the sandwich? Yes! However, that meal may still cause a stomachache. Now, give said chef a full complement of gourmet groceries and guess what you'll get?

This is why I say let Silas cook. He's the perfect coach for this group of kids. He can teach them all the fundamentals of the game at this level and help them grow into their full potential. If there's a change to be made on the sidelines, move Silas into a front office role, but DO NOT get rid of him! Guys like him are too valuable. Why do you think Mark Cuban hated losing him, but knew he couldn't retain him because he had a head coach already? Cuban knew what he had in Silas and what Silas did for Luka Doncic. He can do something similar for the Rockets if given the time to work his magic.

Should Tilman Fertita find the need to move on, I'd look for a more experienced coach who can guide them from bottom of the playoff ladder into top four in the West and real contenders. For now, Silas is the head chef. Continue giving him the groceries he needs, and he'll continue giving these kids the lessons they need to develop. Changing the coach now could stunt their growth. Let him cook!