An Inside Look at the Rockets

3 ways the Rockets can salvage their season

How can the Rockets salvage their season?

The 15-14 Houston Rockets enter Wednesday night's game in precarious territory. On one hand, it is true that the Houston Rockets have developed a strong offensive identity as of late that has led to a four game winning streak. On the other, the Rockets are still a flawed, inconsistent basketball team that has gone through winning streaks like this before this season. The minute you think you've figured Houston out, they morph into something completely different.

So how do you salvage a mediocre season that started with title aspirations? Is there even enough time left to salvage it? These are the tough questions that face Daryl Morey and the rest of Houston's front office as they try to navigate out of somewhat familiar waters. 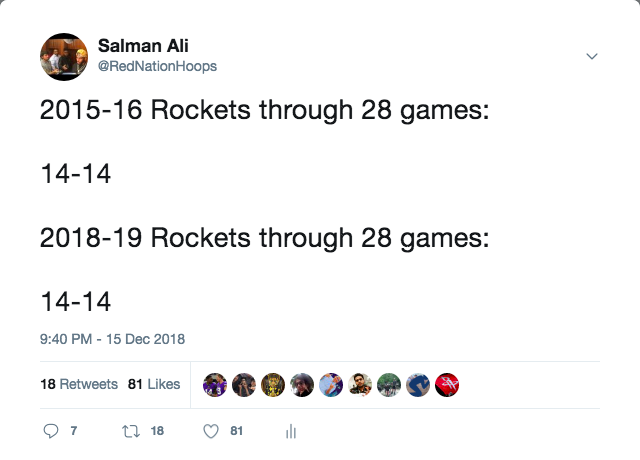 The major difference between the 2015-16 Rockets and the 2018-19 Rockets is that Houston had much greater financial flexibility in 2016 considering Dwight Howard was expected to opt out of his contract. The Rockets operated knowing they would have the capital to retool and chase free agents like Eric Gordon and Ryan Anderson. This season, Houston is a team that's deep into the luxury tax - making it really difficult to operate as there isn't a pending life raft on the way.

By trading for Chris Paul last summer and giving him a four-year max contract, Houston effectively capped their title window at the next 2-3 years. Both of these moves were reasonable and defensible at the time, but it's put the Rockets in a bind that they didn't think they would have to worry about until the latter years of Paul's contract. Houston effectively has three ways they can salvage the season.

While this is obviously the most preferred path, it's also the most difficult. The Houston Rockets currently sit at the 10th seed in a brutally tough Western Conference. It's true that they've been on somewhat of a roll as of late, but they have not shown they can be trusted to be consistent this season. They take four steps forward only to take three steps back.

The main ingredients to succeed are still present (James Harden, Chris Paul, and Clint Capela), but their supporting cast has been incredibly shaky this season. Relying on contributions from rookies like Gary Clark and Danuel House Jr., the Rockets will have to make some serious roster moves to catapult themselves back to the top. They need defensive contributors, shooting, and perhaps some extra size to help with their rebounding woes. While difficult and unlikely, this path is possible because Houston is only 2.5 games back from home-court advantage.

2) Stay competitive while maintaining flexibility to retool this summer

This is the most likely outcome and also what the Rockets did in 2015-16. Houston made a late push for the playoffs that year and took a game off of a 73 win Warriors squad and didn't sacrifice any flexibility to do so.

Prudence is key here. While trading multiple first round picks might make you better in the short term, it won't help in the long-run if the Rockets want to properly re-tool for contention next year.

3) Take the season off, retool around James Harden, grab a high draft pick, and live to fight another day

This is basically your "break in case of emergency" path. The Rockets are unlikely to entertain wasting a year of Harden's prime unless it gets truly dire for Houston. However, the Memphis Grizzlies have shown that taking a year off and acquiring a high-ceiling player like Jarren Jackson Jr. in the draft can be greatly improve your long-term prospects.

This path may also involve cutting ties to a player like Chris Paul and Eric Gordon in favor of better contracts, assets, and draft picks. Again, this path is meant to be drastic as it means the Rockets were in a worse situation than we thought they were. While it may not be attractive to keep your powder dry, make long term trades, and shut down players, it's been done before and can rejuvenate a franchise if done correctly.

I would like the reiterate that it's highly unlikely Houston goes down this path. It's just worth discussing as an option if things get dark for the Rockets.

While the Rockets have a lot of things going against them, including age and salary cap, they also couple of saving graces for the long-term:

It should be interesting to see how the Rockets intend to go about this season.

After Jake Odorizzi went down with a calf strain for the foreseeable future, we discuss how the Astros will manage their rotation and what other options they have in the minors, or on the trade market. Plus, several critical dates to pay attention to in the coming days, weeks.