Amidst Melo Drama, Rockets find a groove with shortened rotation

Amidst constant Carmelo Anthony chatter, the Houston Rockets have found themselves playing good basketball again for the first time since the 2017-18 season came to a close. Good is relative of course, as the Rockets aren’t nearly the same basketball team that stepped off the court in May. However, since their 1-5 start, they have won 5 out of their last 7 games (capped off by an impressive 109-99 win over the Denver Nuggets on Tuesday) and have shown minor glimpses of last year’s team. 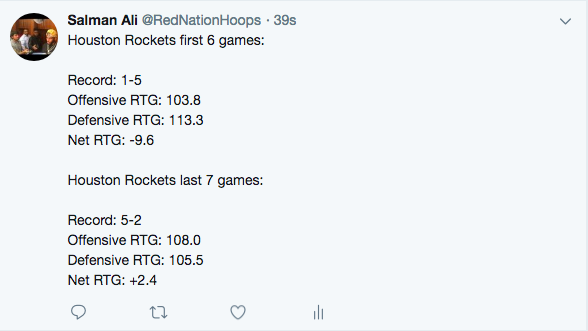 So, how are they doing this? A few reasons.

Since James Ennis returned from injury and was placed into the starting lineup, the Rockets saw huge dividends defensively almost immediately. It's not as if Ennis is a lockdown defender, but he's miles above Carmelo Anthony - who Houston had to start in Ennis’ absence. The Rockets were allowing a blistering 111.0 points per 100 possessions when Anthony was on the floor.

To put that into perspective, that's equivalent to the 26th ranked defense in the NBA. When Anthony is off the floor, the Rockets only allow 103.2 points per 100 possessions - which would be equivalent to the third best defense in the NBA. Now it's important to note that Anthony wasn't the source to all of Houston's problems. However, he certainly wasn't the solution to many of them either.

In addition to swapping Ennis for Anthony, rookie Gary Clark is seeing a huge surge in minutes. The 6'8” swingman has been a stud defensively and slowly gaining Houston's trust more and more, including coach D'Antoni.

Shots are starting to fall

As of November 10th, the Rockets had the worst field goal percentage in the league (41.3%) along with the 28th ranked 3-PT percentage (31.7%). It was unlikely they would shoot this poorly for very long.

On Sunday, GM Daryl Morey talked about how the Rockets liked the quality of the shots they were getting, but just weren't making them. After defeating the Indiana Pacers with an offensive explosion, James Harden echoed the same sentiment.

In Houston's last two games, they've shot 51.7% from the field and 39.3% from 3-PT range (2nd and 7th in that span respectively). James Harden and Chris Paul have started to round into form after slow starts and it's fueled good offensive performances. It'll be interesting to see how long this progression to the mean lasts, but I'm sure the Rockets welcome as much of it as they can.

And finally, possibly the biggest reason for Houston's turnaround is the deliberate shrinking of the rotation. Most people view a short rotation in the regular season to be a bad thing, but for the Rockets, it's a very welcome change. Houston is a very thin team this season and after their first 8-9 guys, there is a noticeable drop-off in quality of production.

The Rockets viewed Anthony, Michael-Carter Williams, and Marquese Chriss as worthwhile gambles, but after 11 regular season games, it's clear why their former teams jettisoned them. Head coach Mike D'Antoni has effectively eliminated them from the rotation and it has since led to a leaner, more effective team. By cutting the fat in negative minutes out of the rotation, the Rockets are able to give themselves a higher percentage chance of winning games.

It's worth questioning the long-term effects of the shortened rotation (fatigue, injuries, etc…), but with the Rockets just a game below .500, they have to be thinking with a short-term perspective until they right the ship. D'Antoni has been a coach criticized for his use of short rotations in the past, but it's hard to question when you look at his alternative options.

The eventual returns of Gerald Green (illness - likely the first to return), Nene Hilario (calf strain), and Brandon Knight (knee) should help, but Houston will have to address it's depth issues at some point in the season. They have most of their taxpayer mid-level exception remaining to spend on players who get bought out or waived. Additionally, they have all of their first round picks moving forward if they decide to make a more significant move.

What matters is the Rockets are on the right track. Questions of minutes distribution and depth can be resolved when Houston has the luxury to think long-term.

With a busy offseason ahead, here are some big names that could join the Astros

Blame game: No, the Houston Texans are NOT a QB away

The Houston Texans loss another heartbreaker on Sunday, and Davis Mills came up short in the fourth quarter once again. But there's plenty of blame to go around. The defense kept the team in the game, but gave up historic numbers on the ground.

Plus, the play calling and use of Rex Burkhead have once again become an issue.

Don't miss the video above as we break down all the action, and look ahead at the big picture.