The doubters are already out in force.  Houston Astros top prospect Kyle Tucker hasn’t exactly set the world on fire since being called up on July 7, and some fans are calling for him to be sent back to AAA.  In this piece, I will break down Tucker’s swing mechanics, and we’ll see how it’s just a matter of time until Tucker is hitting at a clip similar to how he swung it in the minor leagues.

I want to preface this by saying that I’m far from a “Tucker truther.”  I hated the Tucker selection in the draft, and said the Astros should’ve taken Andrew Benintendi out of Arkansas with that selection instead of Tucker.  I thought he had a complex, flawed swing that wouldn’t translate to the next level. However, Tucker has made a multitude of adjustments since entering the Astros system, and his mechanics are ideal for the era of launch angle. 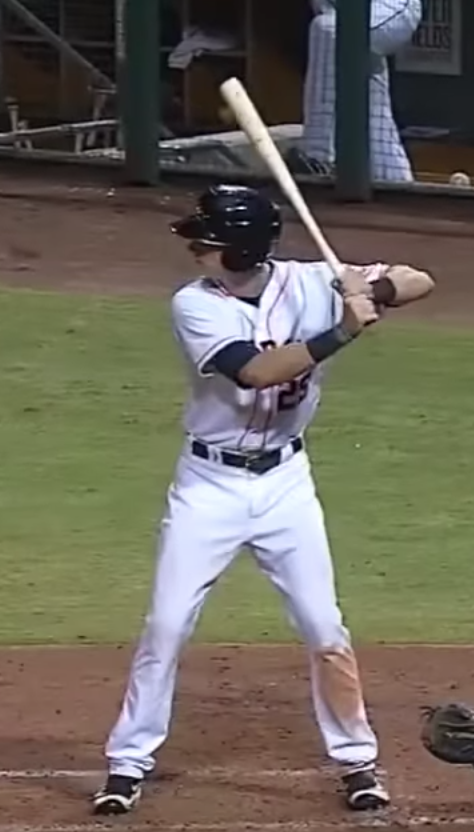 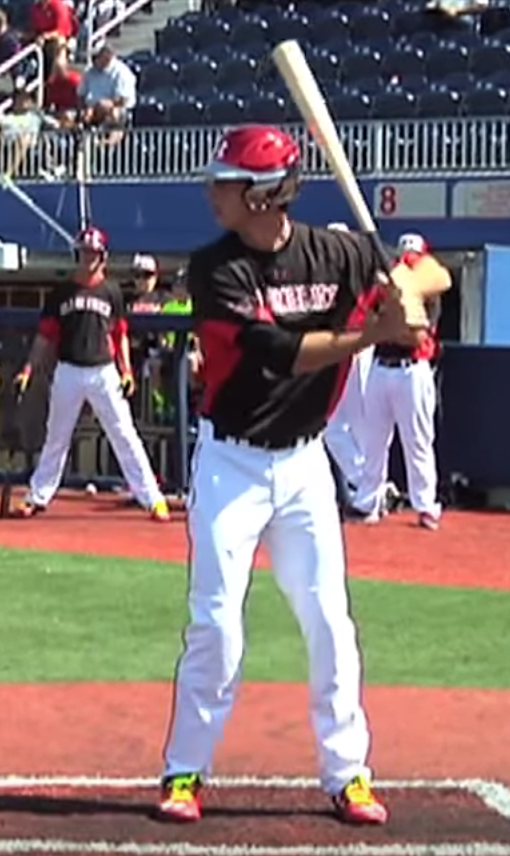 We’ll start by breaking down Tucker’s swing from high school, just months prior to the Astros taking him in the draft.

Tucker’s high school setup is on the left.  The screenshot is from a batting practice session at the Under Armour All-America showcase in 2014.  In this video, he has a very narrow stance, less than shoulder width apart. This is a consistent set up for Tucker across the range of videos you can find of him from high school.

This sort of stance can be complicated, as it requires lots of moving parts in order to get into a good hitting position.

Now, compare that set up to the picture in the Astros uniform on the right.  That is taken from last year’s Arizona Fall League, which his swing most closely resembles now.  His stance is a little bit more spread out, although it is still fairly upright. This will occasionally lead to issues with timing, which is what I think is Tucker’s big issue right now, but timing is easily fixable, something that can be found in an instant.  He’s in a much better spot on the right than the left.

Next we look at Tucker at foot plant from his high school swing.  There’s multiple problems in this screenshot. 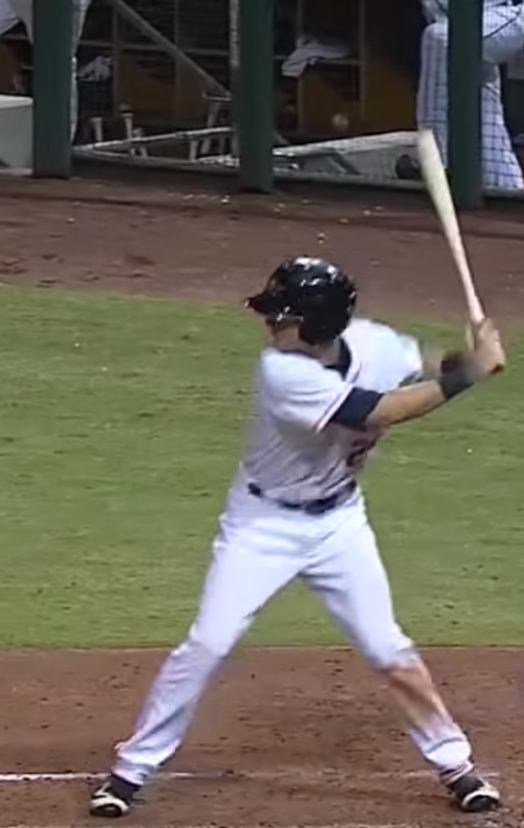 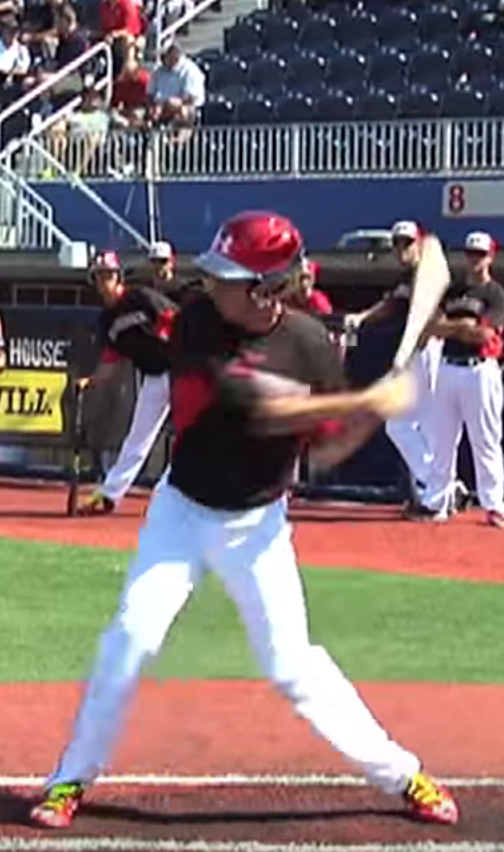 First, take a look at his head movement.  In the screenshot from the setup above, the top of his head is even with the top of the railing from the seating behind him.  At foot plant, his head is considerably lower. This is spurred by the narrow stance he has. It’s hard enough to hit with your head still, imagine how hard it is to hit with it moving like his is.

Then we shift his attention to his weight transfer.  See how his front leg has some bend in it and his hips are on an upward plane.  With his hips riding towards the pitcher he’s lost some power and some bat speed.  Doing this will also lead to a lot of rollover, pull-side ground balls. Essentially, these two mechanical flaws lead to a lot of problems.

Shift your attention to Tucker at foot plant in the Arizona Fall League.  There’s still some head movement, but it’s not as severe, and even in the time since then he’s made adjustments to lessen the head movement.  My guess is that he will just have that quirk his entire career, and that’s an OK quirk to have, it’s just not ideal. Where he’s made huge changes is at foot plant.  His weight is in the middle of his body, he’s very balanced. He hasn’t lost his hips. This will allow him to keep his weight back and tap into that power and leverage that his long, lanky frame provides. 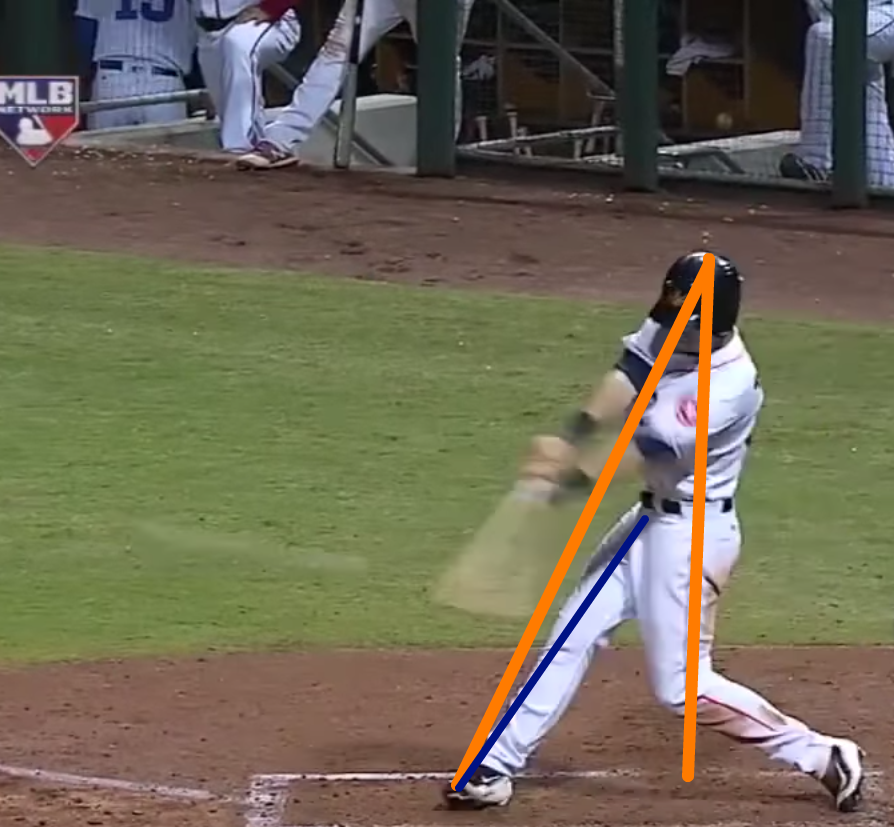 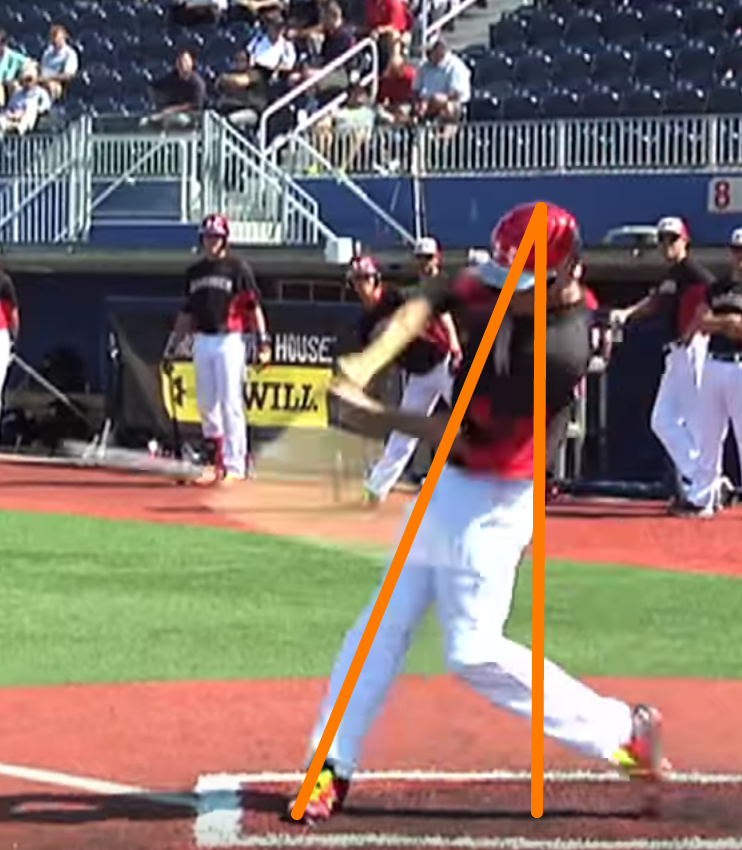 Now we compare the two swings at contact point.  The orange line from his toe to the top of his head is to help show the angle in his body lean.  It is tough to see at a glance, but if you look closely, you can see that in his professional swing he is quite a few more degrees back than in the high school swing.  These few degrees go a long way in creating launch angle and providing power in the swing. Also look at the orange line perpendicular to the ground. In the high school video, his back leg has driven through, which is a linear quality that is against new school launch angle beliefs.  Absolutely nothing is wrong with this, as many hitters in the majors do this. However, on the right you can see his head is directly over the piping on his pants and his foot has almost entirely stayed planted where it started. This is a rotational quality, and the more rotational a hitter is, they usually hit for more power.

I also drew the blue line on the right to show how locked in his front side is, and how posted up he is against that front leg.  All hitters should have that front leg locked in at contact, as it will help maximize bat speed. Tucker does it beautifully in his professional swing.  He still does it in the high school swing, but he doesn’t lock in until much closer to contact.

So what does all of this mean?  Well, it means that Tucker has an extremely advanced swing and he’ll be fine.  I see timing issues with Tucker right now, which probably comes from some mental pressure and nervousness that comes with being a big leaguer.  Put shortly, players with the track record of success and the advanced swing of Tucker don’t struggle for long. Calm down and give him time Astros fans, he’ll be fine.

This week on The Killer B's, Joel Blank and Jeremy Branham react to a pathetic troll job from Yankees fans who had an issue with Astros fans' answers to a poll question. Be sure to check out the video to hear some of this ridiculous criticism.