The NFL coach Fight Club bracket - who do you have?

Earlier this week the walking enigma that is Mike Leach was presented with a question regarding who would win a fight among Pac-12 coaches. As there is nothing that seems to be too crazy for Leach he gave an answer his best shot.  On Wednesday’s episode of The Blitz Fred and AJ took some time to expand on this topic, including hypothetical brawls with NFL coaches. Well dear readers, I have taken this even further. I have created a bracket (complete with 8 different starting “regions”) with all 32 NFL coaches competing to become the one and only NFL Coach Fight Club Champion. 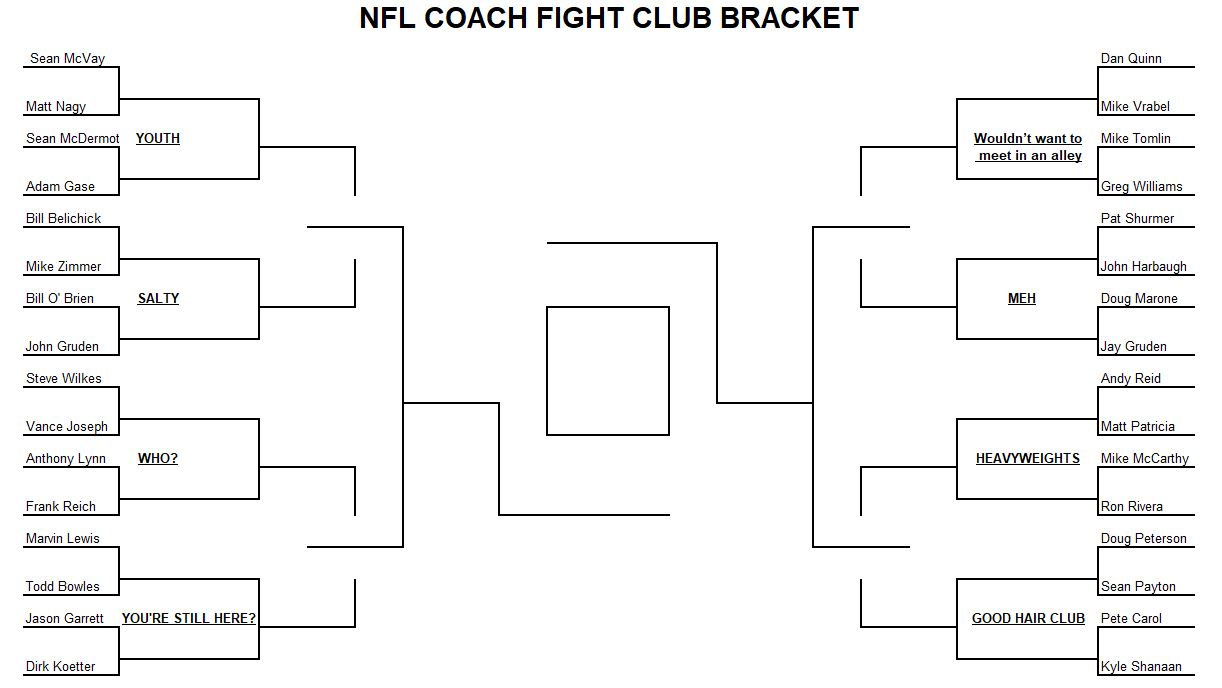 I could have written a long tedious post about which coach would beat who and why, but seeing as I have never actually been in a fight – spare me your judgement – I’m not going to pretend that I know how each matchup would go.  No, instead I leave it to you to argue amongst yourselves. Now go forth print off some brackets and FIGHT.

There's a lot that doesn't add up to the headline "The Rock Buys XFL for $15 Million."
First, Dwayne "The Rock" Johnson certainly is the headliner, the pitchman, the slot machine that Vegas casinos put by the front door, but he's just part of a group that, pending approval by a bankruptcy judge, is purchasing the snake-bit football league created and paid for by pro wrestling mastermind Vince McMahon.
Joining The Rock in the ownership combine are his ex-wife and still business partner Dany Garcia and an investment group called RedBird Capital Partners. RedBird reportedly is sitting on $4 billion of funds, so $15 million is mere peanuts - which the XFL won't be able to sell at concession stands if the league plays without fans in 2021.
Absolutely $15 million is big bucks, and spending it on the XFL 3.0 could involve lots of whammies. Like lawsuits, bill collectors, a cursed brand and suspicious fans who've been burnt two times by the league.
First, why would anybody buy a proven flop? The original XFL played its one and only season in 2001. Faced with dwindling TV ratings and uncertainty that networks were interested in a second season, McMahon pulled the plug. McMahon brought back the XFL 2.0 this year. Just like 2001, the first week's TV ratings were good but quickly spiraled downward. XFL 2.0 played only five games in 2020 before suspending its season in March due to the COVID-19 pandemic, In April, despite pouring $200 million of his own money into the XFL, McMahon announced the league was done. The XFL 2.0 declared Chapter 11 bankruptcy and terminated all of its employees, including commissioner Oliver Luck, who is now suing McMahon for wrongful termination.
Let the record show that the Houston Roughnecks were undefeated with a 5-0 record, in sole first place of the XFL's western division. The Roughnecks' future is up in the air, but they were the league's glamour team and could be rarin' to go in 2021. But like everything else with the XFL, there's a big "if" attached. For example, the University of Houston wants a big chunk of the XFL sale, $800,000, for hosting Roughnecks games last season. Also, the players were officially terminated, the quarterback has signed with the NFL. It may be difficult to get the band back together.
The XFL brand's baggage certainly wouldn't fit in an overhead compartment. If The Rock, Dany Garcia and RedBird wanted to start an alternative football league, wouldn't it be easier, for sure cheaper, to start their own league, with a new name, from scratch?
I'm also not buying that The Rock is buying the XFL. Celebrities, and The Rock is the world's highest-paid actor ($87 million last year), usually don't put up their own money for companies that brandish their name for publicity. In 1989, tennis legend Bjorn Borg declared personal bankruptcy after his sporting goods stores closed. Financial commentators were shocked to discover that Borg had invested his own money in the venture. Baseball great Pete Rose was smarter. In 2016, Rose was in Houston to announce the first of what would be many Pete Rose Hit King Academies across America, where kids would learn to play the game "the right way," like Rose did. There was a whispered doubt that anything involving Rose would be "the right way," and the facility closed a year later. Investors lost their money, but Rose came out smelling like his last name. He was paid up front for use of his name. He invested nothing.
Garcia, announcing the purchase of the XFL, told ESPN that she contacted The Rock right after McMahon threw his league into bankruptcy. She told her ex-husband, "We have something really important to do." She added, "We do sports. We do entertainment. If you look at our resumes, everything points to this moment and opportunity for us, to work with these athletes and build this brand."
So if we smell what The Rock is cooking, this could be the strategy behind buying the XFL. We always hear, for a sports league to survive, it must have rock-solid TV exposure. Who better to get networks and cable onboard with lucrative, long-term deals? The Rock is the most bankable movie star going. He owns and hosts the Titan Games on NBC. He has relationships with FOX and USA cable. While networks may have cast a wary eye on McMahon and his crazy pro wrestling schemes, everybody loves and respects The Rock. TV will want to get in The Rock business.
The almighty NFL has withstood the challenge of alternative leagues for the past 50 years. They come, they fail, they vanish. But what if the NFL is thinking, we could use a minor league like baseball, or a developmental league like basketball? Instead of draft picks and free agents sitting on the bench, or biding time on practice rosters for one or two seasons, wouldn't they gain more from actual games in an NFL-affiliated rookie league owned by one of the most influential people on the planet?
Is The Rock connected? Uh, yeah. In 2011, he was first to let the world know that Osama bin Laden was captured and killed. He tweeted, "Just got word that will shock the world - Land of the free ... home of the brave, DAMN PROUD TO BE AN AMERICAN." He wouldn't reveal who gave him the "word," but he later told Movietone, "I got friends in high places. The individuals who were there were proud to let me know. I knew the president was going to give his speech."
As for his own political ambitions, unlike his wrestling career, The Rock doesn't pull any punches: "Right now the best way I can impact the world is through entertainment. One day, and that day will come, I can impact the world through politics. The great news is that I am American, therefore I can become president."
President? That's almost as powerful as NFL commissioner.

Related Articles Around the Web
roughnecks the rock wwe xfl