We all knew that one kid growing up that you just knew he/she was going to make it. In First Colony Middle School that kid was none other than CEO of Active Faith Sports and former Houston Cougar standout Lanny Smith. I lost touch with Smith for years, but ended up running into him at Rockets practice in 2008 during the summer when was trying to make the roster. I don’t think he remembered me much because he never got a good look at my face since he always blew by everyone - including me - when we tried to guard him.

Smith has moved onto the next phase of his life - life after basketball. In 2012 he officially launched Active Faith Sports and now it is one of the biggest faith-based brands out there for athletes with players like Steph Curry, James Harden, Clayton Kershaw, and more wearing the popular “In Jesus’ Name I Play” wristband and apparel. Smith took time out during the opening weekend of the NBA Playoffs to answer questions regarding his injuries, faith, friendships, and lessons for young basketball players:

Raheel: Now we aren't old by many standards, but do you ever look back now in your early 30's and appreciate what basketball has meant to you in your life?

Smith: There is not a day that goes by that I don’t think about what basketball has meant to my life. I literally miss it every single day. Its funny, you look back and remember times being young and just thinking this was going to last forever. Whenever I get the chance to speak to young players I always implore them to appreciate every moment and experience because it goes by so fast. And once its over, it's over. I miss the moments in the locker room, in practice, on the buses and planes and of course that adrenaline rush and feeling in the games that just can’t be duplicated anywhere else. Basketball took me all over the world. It forged lifelong friendships and helped me make connections that I would have never made. I’m truly grateful for the game and what it has meant for me and my life. There is nothing else like it.

After your string of surgeries and setback, did you ever question why it was happening to you?

I asked that question so many times. Why is this happening to me? I would see other guys who didn’t love the game or take it as seriously as I did or work as hard as I did and yet I was the one suffering from surgery after surgery and injury after injury. It made me angry. I suffered with depression. My faith has always been something that was important in my life and there were times that I was angry with God, too. I just couldn’t understand why it was happening to me.

After your professional career was over, why did you decide to get into the active wear/clothing industry?

I honestly had no idea what I wanted to do after my career was over. It was a source of plenty of stress and worry. I was praying about it and asking God to show me what He wanted me to do. I thought basketball was my calling and my talent and ability to play were my gifts. But obviously God had something different for me and I begged Him to reveal it to me. I was laying around recovering from my last microfracture surgery and this idea came to me to create a sports apparel brand similar to Nike, but one that had faith-based inspirational messages and designs. I thought about the fact that I grew up wearing Nike, Jordan, Adidas, Under Armour, etc. and I wanted to create something just like that but that represented faith and something bigger than just sports.

It has been really cool to see Active Faith grow so much since 2012 - what were some of the challenges you faced growing it?

Wow, there have been so many challenges. The first was just getting people to understand what I was trying to do. Everyone thought i was crazy. Even after getting it launched, we faced and still face to this day the obstacle of being rejected by every mainstream retailer because of the fact that it is faith based. It seems to be a taboo thing that nobody wants to touch. But that forced us to focus on e-commerce which was a blessing in disguise because that’s where the entire consumer industry is moving anyway. Other challenges include being such a small company and trying to deal with the growth the best way we could. People expected us to operate immediately the way Nike, Adidas, UA operate without knowing that we were starting out in my mom's garage. LOL!

What lessons from basketball could you apply to the business world?

There are the obvious lessons like having to put in the extra work, long hours, persevering through tough times and fighting through, teamwork etc… But another thing is that basketball is such a free flowing sport. Unlike football where there is a play and then a huddle and then a play or baseball where there is so much inactivity before each actual play, basketball is nonstop and so much happens on the fly. You have to learn to adjust and to improvise on the fly all the time. As a point guard, having to look to see things happen before they actually happen and improvising a move or pass on the fast break was something that I became accustomed to and actually enjoyed. In business as an entrepreneur, rarely are their two days that are alike and you are constantly having to improvise and try to see things happen before they actually do. Having that “court vision” and being able to make the right moves to execute are critical to creating a startup company and growing it successfully. 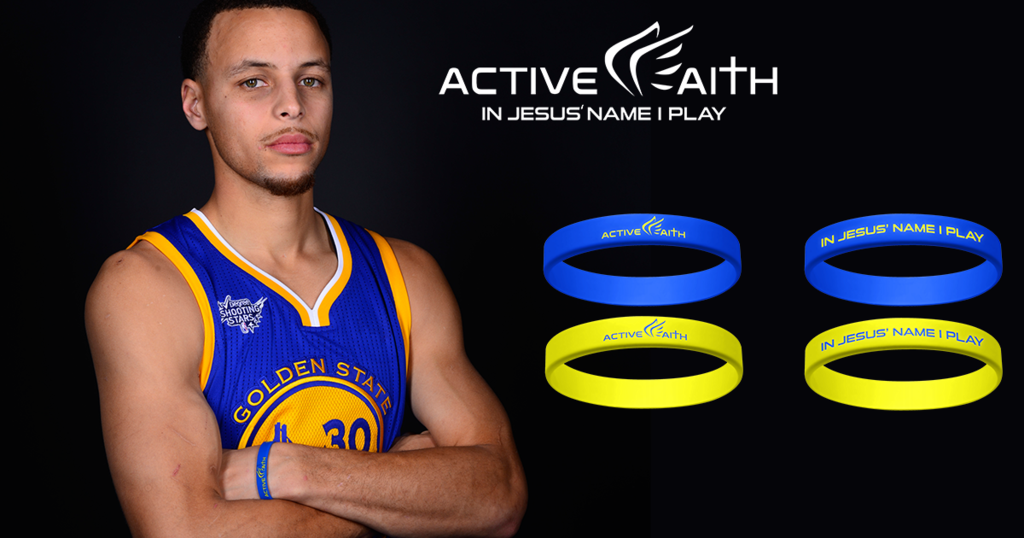 How did you and Steph Curry become friends and what was it like seeing Active Faith on him while he rose to the top of the basketball world?

In 2009 I played in the NBA Development league and I became very close with one of my teammates, Anthony Tolliver. Anthony got called up to the Golden State Warriors that year and he became close with Steph. I signed with the Sacramento Kings and then got hurt. So Anthony was calling me and checking on me about my injury and asked what I was going to do next. I told him about my idea and vision for Active Faith Sports and he said Steph would love this idea. He introduced me to Steph and both of them put in the seed money to get the company launched. That was Steph’s rookie and second year in the league. Over the years we have spent more time together, met each other’s families, and just become closer and developed a friendship. So it started out as a business partnership that grew into a friendship over the years. It has been amazing to watch his rise to where he is now from when we first met. We were there when he was suffering through the injuries early in his career and saw the pain and frustration that he dealt with. A lot of people don’t know how seriously close the situation was to another Grant Hill type story where the entire trajectory of his career could have changed or ended due to the ankle surgery. To watch him come out of that and have the success he has had has been so satisfying. It couldn’t have happened to a better person. He is just as humble and authentic as he was when I first met him and hasn’t changed. In a way it was a symbiotic relationship as Active Faith was growing and rising at the same time that he was.

What was it like seeing the Cougars go on their run this season?

This season was so much fun. UH Cougars have a special place in my heart as I took so much pride in being a hometown kid that stayed home and played during an era when all of our top Houston players were leaving and going to other schools. It meant something more to me to have that HOUSTON across my chest. Funny thing is Coach Sampson was recruiting me when he was the coach at Oklahoma and he offered me a scholarship. I turned him down and stayed home to play at UH. We laugh about that now. But he has been amazing as far as inviting me to be around the program. I'm at practices, I speak to the players and have a big brother type of role with the team. So it was even more exciting to watch the Cougars have the season that they had. I was there at the tournament and in the locker room after that heartbreaking shot. Still hurts to see the pain in the guys’ faces. They worked so hard and played so well and have put UH back on the map and in the National conversation. I’m so excited about where this program is headed and the future and being able to still be connected and be part of it.

This is going to sound counterproductive. But do everything you can to put as much as you can into that dream WHILE at the same time, not allowing basketball to be your entire identity. Its nearly impossible to do. To achieve something like making it to the NBA, it is going to take every ounce of you. Talent will not be enough. There are 400 jobs in the NBA and there are millions of players trying to get there. The percentages are against you. So it's going to take everything you have to separate yourself to make it. But I challenge kids to make sure they have an identity outside of being a basketball player because I see so many guys that don’t make it and they fall down a deep hole of depression not knowing who they are without the game of basketball. I even see it happen to guys who actually make it to the NBA. The game ends for us all one day. We grow up attaching our entire self identity, self esteem, self worth to this game. Then when the game ends, we have no idea who we are or what to do without it. Chase your dream young man. Give it everything you can because it will take everything you have to make it. But don’t lose yourself in the journey…let basketball be what you do, not who you are.