Salman Ali: How the Rockets can make Carmelo Anthony better

It's no secret that the Houston Rockets have been after 10-time All Star Carmelo Anthony for a very long time. Houston met with Anthony in July of 2014 and made a strong run at him last summer when he was became available via trade. Even going back to when he originally demanded to be traded from the Nuggets, the Rockets made their interest level known.

They have always been fond of Anthony, and for the most part, their interest has been warranted.

This is a different Carmelo Anthony, however. His athleticism is diminishing, he posted career lows in scoring and efficiency last season for Oklahoma City, and at 34 years old, he may be a bigger defensive liability now than he's been at any point in his career. It's very clear that he's just not the same level of player. There is a reason Oklahoma City chose to move on from him.

Nonetheless Houston remains firm in their pursuit of Anthony once he is bought out or more likely, waived by the Atlanta Hawks. It goes without saying that Anthony is still a very skilled basketball player, but the impact just hasn’t been felt on the court for a few years now. Carmelo is a good shooter, he can handle the ball, he can create his own shot, his footwork is good, he has historically rebounded well for his position, and he can attack closeouts. The Rockets see these redeemable qualities in him and feel they can maximize them towards positive impact in their organization.

Houston isn't scared off by what happened to Anthony in Oklahoma City.

"People look at how a player has worked in another team's system on offense and they assume that that's how he's going to work in every other system." Daryl Morey said on The Herd with Colin Cowherd earlier this month, alluding to Anthony without saying his name specifically.

Morey talked about how players generally play better under Mike D'Antoni's system, citing Gerald Green as a prime example. And the truth is, he's right. There are ways that the Rockets can make Carmelo Anthony a better basketball player, and in turn, making Anthony a net positive addition.

The biggest and most immediate area the Rockets can aid in improving Carmelo's game would be his shot selection. The Rockets have improved the shot selection of players every single year to make them the most efficient versions of themselves. Let’s take a look at Gerald Green, since that’s who Morey cited as an example in his interview. 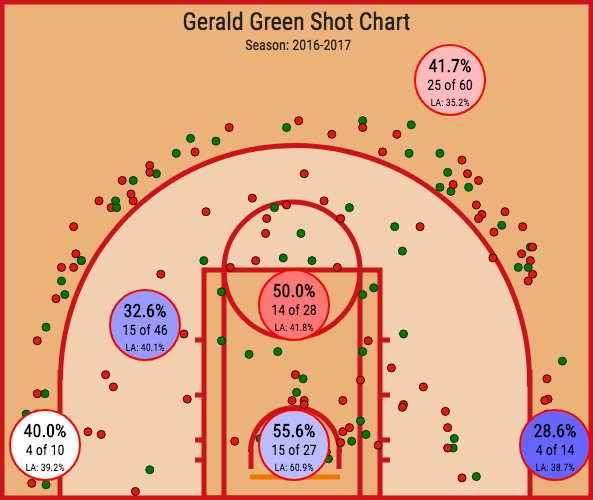 This is Gerald Green’s shot chart from Boston. Green shot 33.3% from mid range that season and yet 23.4% of his shots were from the midrange area, per NBA.com/stats. While the Celtics are certainly a very smart basketball team, they never maximized Green’s effectiveness by taking away these shots.

He also needed to be taking more 3-pointers as Green was a career 36% 3-PT shooter and in Boston he was only taking 2.4 threes per game (only 50% of his FGAs). As you can see by the chart, he was extremely comfortable with above the break threes (60 FGAs) and shot them at a high percentage (41.7%). This was a weapon that the Celtics clearly underutilized.

That all changed when Green got to Houston, however. 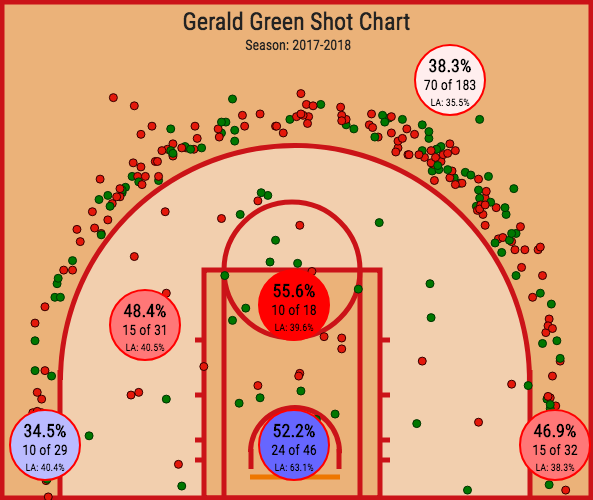 As you can see, not only did the volume of 3-pointers increase exponentially, he nearly stopped taking midrange jumpers entirely. Gerald Green went from shooting 2.4 threes a game (50% of his FGAs) to 7.4 threes a game (72% of his FGAs). The Rockets also reduced his percentage of midrange shots from 23.4% to 9.4%.

Playing for a coach like Mike D’Antoni, who encourages his players to shoot 3-pointers when they’re open and/or comfortable, also helped Green immensely. Under D’Antoni’s system of free flowing offense, Green’s percentage of above the break 3s skyrocketed from 32.1% to 65.1%. He also maintained good efficiency on those shots (38.3%).

It’s worth noting that Gerald Green’s true shooting percentage improved from 52.4% to 56.6%.

In Houston’s system, you are encouraged to take the shots you are most comfortable with and Gerald clearly was comfortable taking 3-pointers at a high clip. With a coach like Mike D’Antoni and installing Daryl Morey’s philosophy of limiting the inefficiency of midrange jumpers, players usually see a cleanup in their shot selection. So it is not unrealistic to assume the same will happen with Carmelo Anthony in Houston. 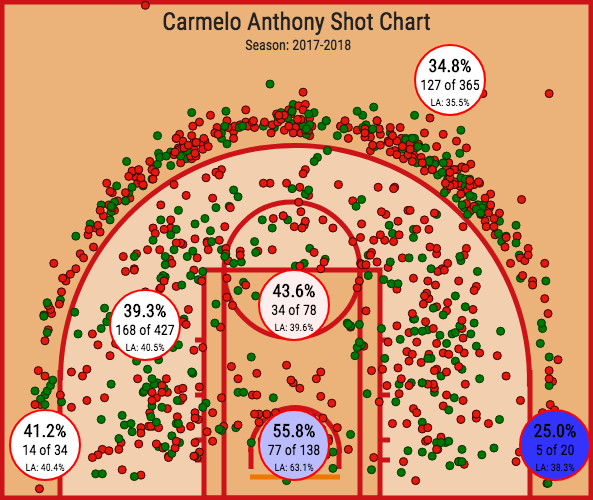 You don’t have to view a shot chart to know that Carmelo Anthony takes a ton of midrange jumpers. In fact, Anthony takes the fifth most midrange jumpers in the entire NBA, per NBA.com/stats. They took up 39.3% of his total field goal attempts last season and he only hit them at an ironic rate of 39.3%. That’s only good for 0.786 points per possession.

Now historically Anthony’s actually been a pretty OK midrange shooter, always hovering around the low-to-mid-40s in percentage. However, he’s never been good enough to justify him taking as many as he does. There’s only a select group of players good enough to shoot them (Dirk Nowitzki, Chris Paul, Kevin Durant, etc…) and Anthony unfortunately falls just short of that class. The Rockets will almost assuredly limit his midrange attempts because of this alone.

Anthony, much like Green, is also taking too few 3-pointers for the quality of shooter he is. As you can see from the shot chart, Anthony is very comfortable shooting above the break, trailer 3s and shoots them at a decent clip (34.8%). However, his true strength lies in that right corner three and he shoots them at an elite clip (41.2%). When you look at shot charts throughout the rest of his career, this remains a trend. It’s truly been an underutilized weapon for him and he didn’t shoot nearly enough of them last year with the Thunder. 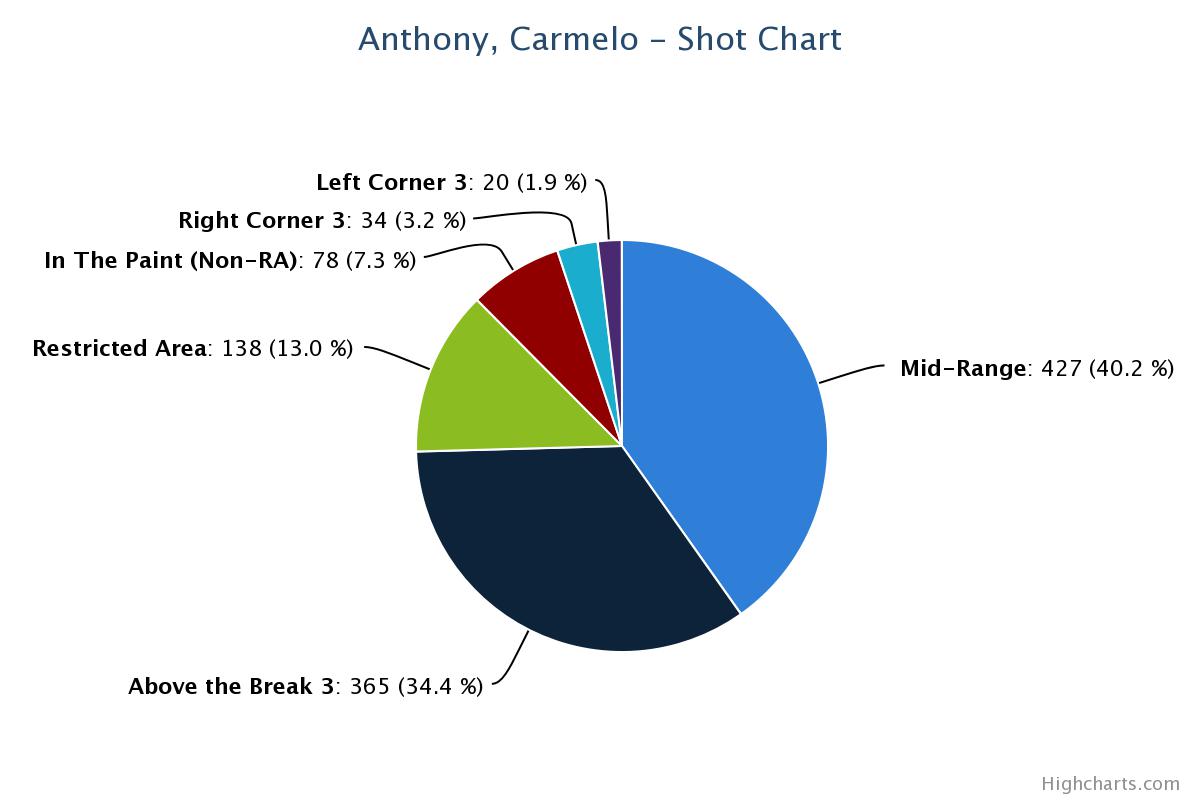 Anthony only took 3.2% of his shots from the right corner compared to 34.4% of his field goal attempts being above the break threes and 40.2% being mid range jumpers. While the Rockets like to have a trailer like Ryan Anderson shoot threes above the break in transition, they also love having their shooters slotted in the corners for easy catch and shoot opportunities. If Anthony were to take more shots from these corner areas (particularly the right one), he could see a notable spike in his 3-point percentage.

Carmelo Anthony spent a great deal of his time trying to create his own shot in Oklahoma City. These usually resulted on low efficiency shots and wasted possessions. There is now an incredible amount of data throughout Anthony’s career that supports the conclusion that he is a much better catch and shoot player than he is at creating his own looks.

Notice how Anthony’s 3-PT percentage dips with every dribble he takes. In Houston, there won’t be a need for his ball handling services considering the Rockets have very capable playmakers in Chris Paul and James Harden already present.

Anthony also shot a staggering 41.9% on wide open threes last season. In Houston, Chris Paul and James Harden generate a ton of these kinds of looks even against the best defenses. One of the two will penetrate, either in transition or in a half court pick and roll situation, and kick out to shooters constantly in the corner where Mike D’Antoni likes to place them.

Take for instance, someone like P.J. Tucker. Last season, Tucker constantly benefited from the looks Chris Paul and James Harden were able to generate for him. While he’s not the most prolific three point shooter, Tucker feasted on corner threes in the regular season (37.1%) and playoffs (46.7%) out of catch and shoot opportunities.

Here’s an example of Tucker getting a wide open 3 in the Western Conference Finals in transition against the Golden State Warriors.

Mike D’Antoni also likes to use his bigs as a trailer to shoot above the break threes (possibly Carmelo Anthony 's favorite shot, after midrange jumpers).

Here’s an example of Houston using Ryan Anderson as that trailer for an above the break 3.

Anthony will theoretically get looks like this all the time in Houston because of the amount of attention Chris Paul and James Harden draw.

So as you can see, there’s a way Carmelo Anthony can benefit from this soon-to-be-marriage with the Rockets. He just has to be willing to adapt his game to the philosophies of the organization and carve out a new role for himself that can still be very productive in this league. The tools will be at his disposal and the pathway to a successful partnership between the Rockets and Anthony is present.

​2 Houston Astros perspectives are shifting in opposite directions

Astros finalizing a huge splash in free agency, per reports

Reaction: How the Jose Abreu addition impacts the Astros

ESPN Houston's The Killer B's react to the Astros reportedly signing Jose Abreu to a 3-year contract, discuss how his bat will impact the lineup, project what this signing means for the Astros moving forward in free agency, and much more!