State of the Rockets: Still hazy, but trending upward

Due to early season inconsistency, the 2018-19 Houston Rockets have been a difficult team to analyze. Injuries and suspensions have prevented the Rockets from having a consistent rotation and forming an identity. What are the Rockets really good at this year or really bad at this year? It sounds like a dumb question, but it’s a question nobody really knows the answers to yet.

What we do know is the Rockets have taken very deliberate and decisive steps these past few weeks in trying to form that identity. After much early speculation, the Rockets chose to not abandon their switching defense, which ended up being the correct long-term play. NBA players are creatures of habit and changing the entire defensive scheme midseason could’ve proved to be disastrous. Over the past nine games, Houston possesses the seventh best defense in the league.

General Daryl Morey talked about how the Rockets are comfortable with the looks they are giving up when Houston was 4-7 and he is correct in thinking so. Houston is third fewest in the league at opponents attempted 3-pointers per 100 possessions. This is a telltale sign of a good, modern-day defense that chases opponent off of the 3-point line and forces them into long twos. Take for example the Warriors game in which the Rockets only allowed the Warriors to shoot 18 3-pointers (they shoot 29.1 3s on average) while Houston attempted 47. It doesn’t get any better than that for 3-point defense.

Here is a great example.

The Rockets have also started to show glimpses of last year’s offensive juggernaut over the past few games, scoring 123.5 points per 100 possessions (good for first in that span). What’s changed? Literally nothing except getting James Harden healthy and the team making shots. Prior to Houston’s four-game winning streak, they were shooting 34.0% on threes, good for 24th in the league. During Houston’s streak, they are shooting 38.8% which is good for sixth in the league. The number of wide open and open attempts are still the same. Houston functionally looks like the same basketball team it did a month ago, but with made jumpers and healthy bodies.

Another major change Houston’s made to help establish its burgeoning identity is shortening the rotation and establishing clear roles. Of the nine players used (James Harden, Chris Paul, Clint Capela, P.J. Tucker, James Ennis, Eric Gordon, Gerald Green, Gary Clark, and Isaiah Hartenstein), seven played a major part in last year’s basketball team and have very good ideas of where they stand within their roles. The other two - Gary Clark and Isaiah Hartenstein - have caught on quickly as to what it takes to be a role player for the Rockets.

The talk of the town has been Gary Clark and rightfully so. The 24-year-old rookie out of the University of Cincinnati has been nothing short of a revelation for Houston. Clark’s tenacity has allowed the Rockets to be a facsimile of what they were last year defensively. Although he’s still coming along as an offensive player, he’s been good enough on defense for Mike D’Antoni to play him major minutes despite his shortcomings (and his rookie status). It’s also no secret that Clark’s emergence made it much easier for Houston to part ways with forward Carmelo Anthony. He also seems to have a good head on his shoulders.

As for Isaiah Hartenstein, he may not be a very good offensive player right now but the man just hustles on both ends of the court. Offensively, he’s an active screen setter who loves to clobber the offensive glass and dive for loose balls. And defensively, he’s good enough laterally to not be a complete liability in Houston’s switching scheme. Even though he’s struggling to finish around the rim right now, he just understands his role. 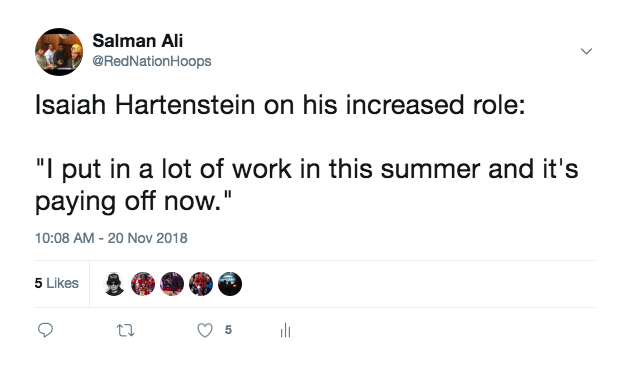 So what are the Rockets? Are they a good team again or is this just a good stretch for them? The truth is it’s way too early to tell and they don’t have a fully-formed identity yet, but they’re certainly headed in the right direction.

Houston Texans QB Davis Mills was a guest on The Pat McAfee Show and predicted a "big leap" in year 2 with the Texans. How realistic is a big leap from Mills in year 2, and should the Texans be given credit for giving Mills the chance to be their long-term starter? ESPN Houston's Jake Asman, Cody, Stoots, and Brad Kellner discuss on The Wheelhouse.