Fred Faour: You are never too old or too out of shape to take up running as a hobby

Fred Faour
Jun 3, 2018, 11:22 am
Start running and you might see views like this one of AT&T Park in San Francisco. Fred Faour/SportsMap

So yes, technically I am on vacation, celebrating my wife's birthday with a trip to San Francisco. And it is a pretty slow time in Houston sports, so I could easily pass on writing my Monday column and no one would fault me.

Alas, I had some time after recovering from a nice run and thought today's missive would take a different direction.

For the past several years, we have been running (well, in my case jogging or staggering) through 10ks as a way to at least pretend to stay in shape. One of our favorites has been the Run Houston Race series, which features five different runs at five different locations around Houston. It is a cool way to keep your running goals, see some different places in the city and get in a nice run (they do 5ks as well). Two years ago, we did them all. Last year, due to travel conflicts, we missed most of them. This year, we vowed to do them all again.

Then this trip came up and conflicted with Sunday's race at UH-Clear Lake, the third in the series. Of the five, it is probably my second favorite (behind the UH run), in part because I spent a lot of my college life (and all my post-graduate work) at the school, and always had a fondness for the area.

Fortunately, the series now offers a "Virtual Race" option for just such conflicts. In essence, you have to run your sign-up distance three days before or after the actual race day to get credit for running. No offense to Clear Lake, but getting to run along the bay in San Francisco was a bit of an upgrade. 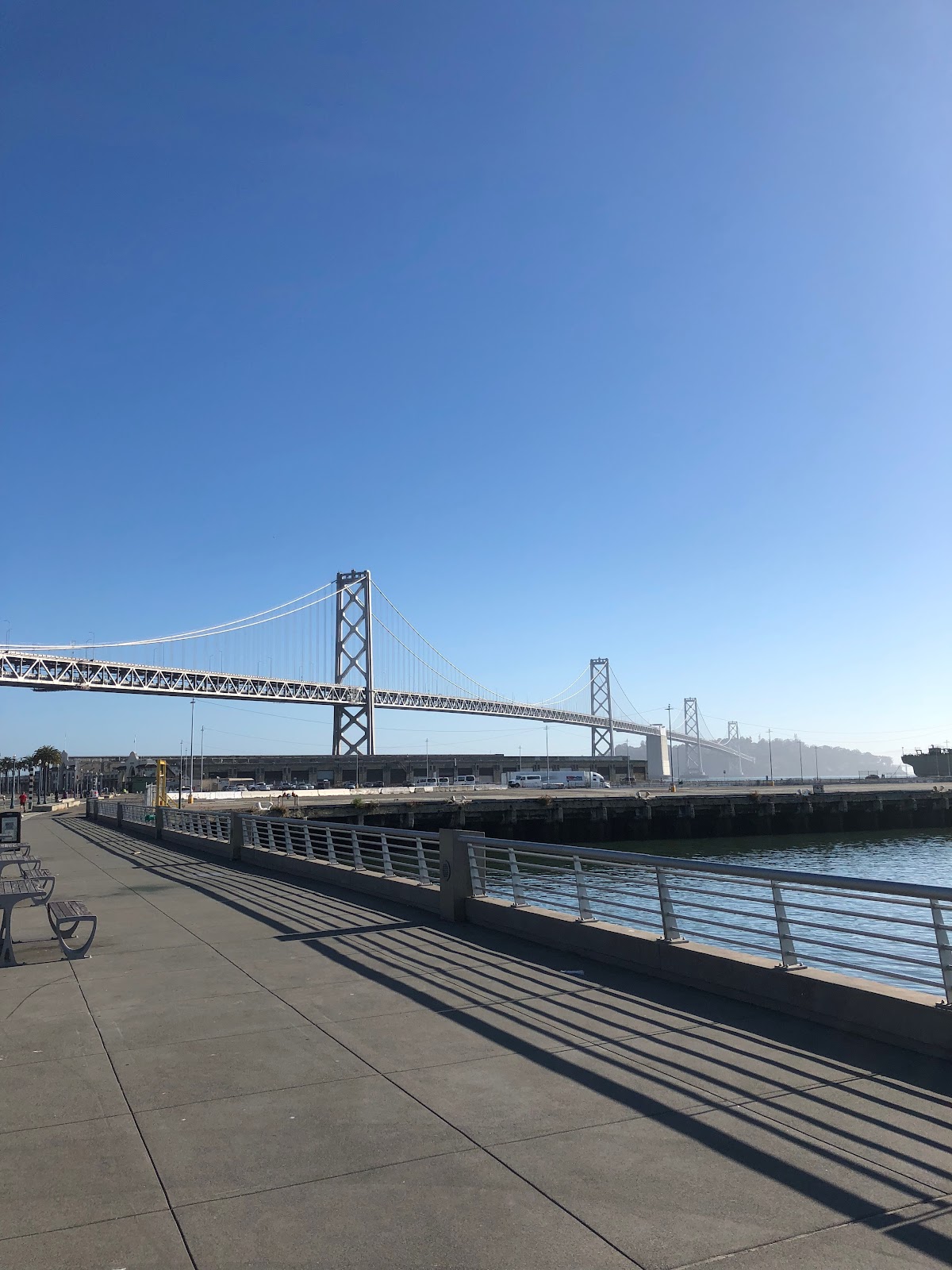 The Bay Bridge. Photo by me.

My path took me from downtown San Francisco to The Embarcadero trail. It was along the water the entire way, and allowed me to get sensational views of the Bay Bridge and perhaps the most unique baseball stadium in the country, AT&T Park. My time was almost record slow, but it was hard to not stop and snap pictures quite often, and my always dodgy knee decided to buckle about 7k in. But I finished it, got credit for the third of the Run Houston races and also managed to take in some amazing scenery. (And pretty sure it was about 20 degrees cooler than it was in Clear Lake today).

I don’t run in these things to try to post fast times (not happening) and I don’t care if I finish last. I do them to have a reason to stay in shape, have some fun and push my aging body. As we get older, some of the things we used to do just aren’t practical (basketball, for instance. I am one snapped knee from six months of rehab, and who has time for that?). I was never much of a runner -- I always needed baskets or goal posts to shoot for -- but I enjoy it now nonetheless.

So if you are thinking of getting started, there are a lot of ways to get going. I started with the C2-5k app, which got me off the couch and started a program of running and walking to build up enough stamina to run a 5k. After about a year of 5ks, we stretched out to 10ks, and have been doing them ever since. At one point I actually ran a half marathon, and eventually would not mind trying another, but I am a long way from that at the moment. Regardless, the point is anyone can get out and run, and you are never too old or out of shape. (It's not like I am in perfect shape). Run Houston has two races left in the fall, (UH and Constellation Field in Sugar Land) and you have plenty time to get up to 5k speed.

Plus, there is no shortage of races for different causes every weekend in Houston. I tend to back off most of the summer races because the heat and humidity is so oppressive, but every now and then one crops up and I try it. (And vow to never again run in August, then sign up for another race two weeks later).

So if you have been looking  to get off the couch, and want to try something that can be fun, has a nice social aspect to it and can help you get in better shape, download the app and get started. You might find you enjoy it.

And before you say there is no way you could do it...I am an old, slightly overweight man with bad knees and health issues. If I can do it, what should stop you from getting started?

Then you can feel better about yourself when you blast past me on a run.