Jerry Bo
Feb 2, 2018, 7:37 am
Bill Belichick has two weeks to prepare for Nick Foles and the Eagles. Eagles.com

In the game of football, the game gives you life every 40 seconds.

The number 40 is one that you hear often leading up to this years Super Bowl.

In the Merriam-Webster dictionary, over the hill is considered to be: past one's prime.
In your lifetime, you will hear the reference "over the hill" on various occasions. Whether it's celebrating someone's 40th Birthday, or when someone is referring to someone as old or as slowing down.

On Aug. 3, Tom Brady turned 40, leaving us looking for words to describe someone who looks far from over the hill as he ages. Brady threw for 4,577 yards while keeping a 66.3 % completion percentage this regular season. That’s his second-best completion percentage in nine years and his fourth most yardage in that time frame. This season, he became the first quarterback to throw four touchdowns in a game at the age of 40. Not only that, but he led the league in passing attempts and completions giving merit to his arm still being what some describe as "live" and not spent. Is that what we call over the hill?

Maybe it's the same words we looked for in 2009 when 40-year-old Brett Farve threw up 4,202 yards and had a 33 touchdown to 7 interception ratio. The aged Farve led the Vikings to the NFC Championship game, defining the logic in age is a number.

If 40 describes the act of climbing over the hill in life, what exactly is on the other side?

Also, 40%, seems to be the percentage of needed pressure to make Brady uncomfortable. In both of the Super Bowl matchups vs. the Giants, the defense was able to create pressure on over 40% of Brady's dropbacks. The key to keeping Brady frustrated is to collapse his pocket but doing so using as few bodies as possible.

Every Super Bowl Brady has won, he has faced less than 40% pressure on his dropbacks. Just last year, the Falcons failed to continue generating pressure in the second half with the big lead opting to play slightly more conservative keeping the game in front of them.

The Blue Print is exposed, and now it's a matter of having the personnel to be able to execute it. In 2015, the top raked Broncos defense was able to do just that, holding New England to 18 total points in the AFC title game. Again, by generating pressure on over 41% of the defensive plays.

The Eagles created pressure on quarterbacks on 271 occasions this year, besting the second best opponent by 27 (Jaguars). That figure puts them over the fundamental figure of 40% in pressure created this season, transcending the mark that is kryptonite to the New England Golden Child. A huge stat the Eagles have in their favor is they hold the leagues 10th lowest blitz rate, meaning they can get to the quarterback without necessarily having to send extra players. They can do this because of the ferocious front four. Well, let me rephrase that, and this is what makes this team different. They can be described more of a front seven with the depth they have and the amount of rotating they do.

Fletcher Cox, Brandon Graham and Chris Long act as the rushers off the edge. Derek Barnett, Timmy Jernigan, Vinny Curry, and Beau Allen, round out a fierce rotation of 7 players that defensive coordinator Jim Schwartz thrives on keeping fresh. The Jaguars blitzed at over a rate of 41 % through three quarters in the Championship round. The lack of depth from the defensive line caught up to them in the most pivotal moments, and Brady was able to find time when he needed it.

The plan is set and coming into games teams understand the principals of Mission Attack Brady. The only dilemma is you're dealing with a champion, the best to ever do it. This year when under pressure, Brady has a passer rating of 96.6 and a 59.9% completion rate; that’s almost ten higher than his competitor's ratings.

When looking how you can move the ball on the Eagles you have to find their few weak spots. 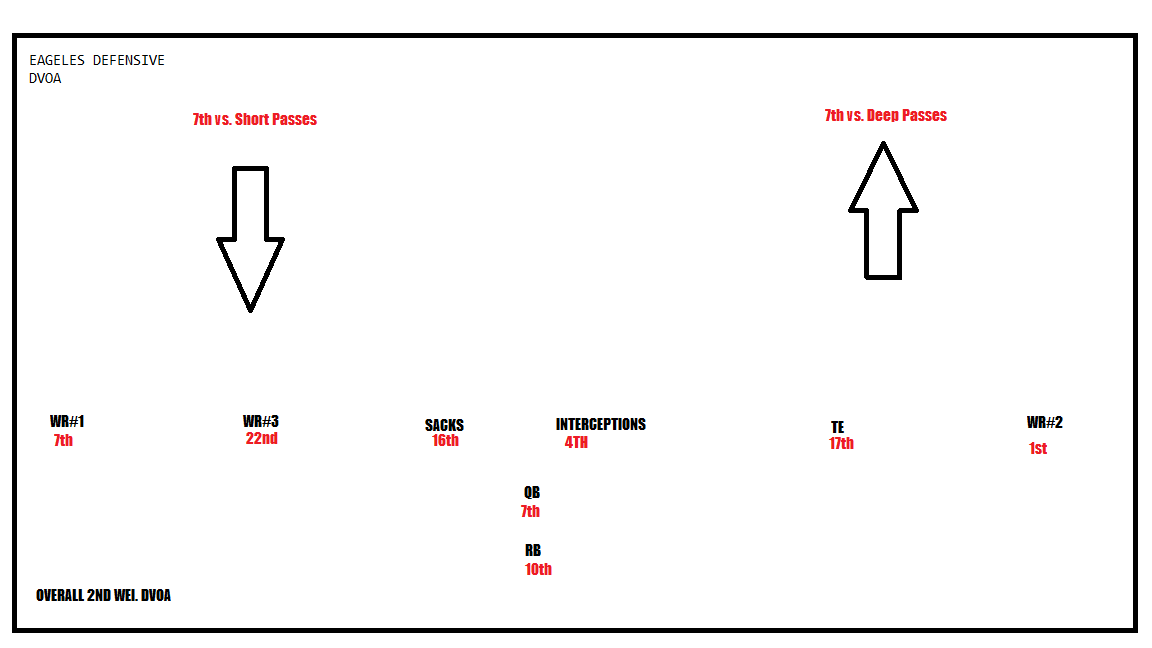 As you can see, the Eagles defense is very good in different areas of the field. Where they do struggle is in the middle of the field and against WR 3's and 4's as well as the tight end position. We mentioned how the Eagles defensive scheme allows them to create pressure without having to blitz extra bodies. What those extra men can do in coverage when asked to make a play will be vital in getting the Patriots offense off the field.

A focal point of this game; Philidelphia ranks first in adjusted line yards with 2.99, but they rank 23rd in open field rank. What this tells you is they are elite up front on the defensive line, but the second level struggles in pursuit and limiting open field yards. That’s exactly what the Patriots will thrive on.

So what adjustments do the Patriots have to make to exploit the weaknesses we have found in the Eagles defense?
None!  The Patriots are notorious for running 11- personnel on over 60% of their offensive snaps. Doing so will keep the extra defensive back to stay in. Look for Danny Amendola or whoever Bill Belicheck rotates in and out of the slot to have success throughout the game. Throughout the years, the popularity of teams running 11-personnel has grown due to its success.

(11 man= one running back, one tight end, and three wide receivers).

The popularity has expanded with teams seeing the success. In 2016 the Patriots were ranked 1st in DVOA but were off the charts efficient when in 11 man personnel. 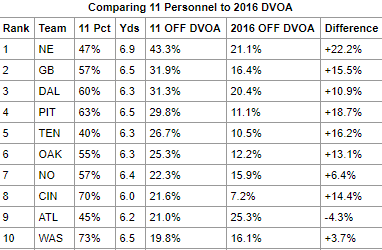 The Patriots will look to exploit the Eagles defense with 11 man personnel while moving Gronkowski around. Word is getting out that Malcolm Jenkins may shadow the tight end. If thats the case, look for New England to split Gronk out wide frequently, creating one on one and moving an extra run stopping safety away from the middle of the field.

The Patriots lead the league in opponent starting field position. The league average is opponents starting drives at the 28-yard line. Just last week, Jacksonville had four drives start inside the 16-yard line, three of which were inside the 10 yards line. Since 2009, every year the Patriots special teams have ranked inside the top six overall according to football outsiders.  In the Championship round, the Jaguars started their drives on the 20-yard line the league average is 28. This year the Patriots special teams rank third overall weighted DVOA, while the Eagles sit at 16th.

The game will start somewhat conservative, and the halftime adjustments will be critical. In a game that will be won by in-game adjustments, I have to lean to the Dark Side. Patriots struggle in the beginning but Tom Brady will eventually beat the blitz, forcing Nick Foles to be relied on to make plays. With two weeks to gameplan for the one hit wonder backup, Bill Belichick gets the last laugh.

Patriots -4
First Quarter Under 9.5
Eagles Team total under 21.5
First Half under 24

Any questions or comments reach me at @JerryBoKnowz on twitter.

Examining the ripple effect of an Astros-Verlander divorce

How any Justin Verlander move will have massive Astros implications

Jermaine Every
Let him cook! Photo by Tim Warner/Getty Images

The Houston Rockets are in the midst of a rebuild. Jalen Green and Kevin Porter Jr are studs. KPJ just signed a four-year extension with the team. Other guys like Jabari Smith Jr, Kenyon Martin Jr, Alperen Sengun, Josh Christopher, Tari Eason, and Jae'Sean Tate are really good pieces to surround Green and KPJ with. The only issue with this group: they're REALLY young! Tate is the elder statesman at 27 of the young nucleus. Most are barely old enough to buy a drink. Some still aren't old enough! They're a bunch of green bananas waiting to turn yellow to slightly brown and be ripe enough for consumption.

We need to give it time. Just like bananas, they take time to ripen. Coach Stephen Silas is known for developing young players. His most prized student is the star player for that team in South Oklahoma up 45. Number 77 for that team credited Silas with helping him realize his All-Pro potential while Silas was a part of the coaching staff there. To a man, all his former players credit him with being a positive influence on their careers. So why are fans in a rush to get rid of him?

When you look at the Rockets' record over the last few years, it's gross. Sure, they've been a lottery team the last couple of seasons, but that was by design. As part of the Chris Paul and Russell Westbrook trades, they gave away pick swap rights. Had they not been that bad, they wouldn't have been able to draft Green or Smith Jr. Those two guys are building blocks for the future, along with KPJ. Giving those picks away would've put this team further down the totem pole of developing themselves into a contender. Losing pays off when you can hit on high lottery picks.

If you give a chef dirt, bread, ham, molded cheese, and spoiled mayo, can you expect anything else but a nasty ham sandwich? How about if the chef was given a steak that is almost rotten, potatoes with root growth, and spoiled butter? Could you expect a better meal than the sandwich? Yes! However, that meal may still cause a stomachache. Now, give said chef a full complement of gourmet groceries and guess what you'll get?

This is why I say let Silas cook. He's the perfect coach for this group of kids. He can teach them all the fundamentals of the game at this level and help them grow into their full potential. If there's a change to be made on the sidelines, move Silas into a front office role, but DO NOT get rid of him! Guys like him are too valuable. Why do you think Mark Cuban hated losing him, but knew he couldn't retain him because he had a head coach already? Cuban knew what he had in Silas and what Silas did for Luka Doncic. He can do something similar for the Rockets if given the time to work his magic.

Should Tilman Fertita find the need to move on, I'd look for a more experienced coach who can guide them from bottom of the playoff ladder into top four in the West and real contenders. For now, Silas is the head chef. Continue giving him the groceries he needs, and he'll continue giving these kids the lessons they need to develop. Changing the coach now could stunt their growth. Let him cook!