The Astros pitching staff was a major question mark for a portion of the season. After defending AL Cy Young winner Justin Verlander went down, the Astros turned to pitchers like Brandon Bielak, Brandon Bailey, Bryan Abreu, Cionel Perez, and Humberto Castellanos to fill the void while they waited on Jose Urquidy to return from the COVID list and a potential Verlander return.

Verlander would never return, instead opting for Tommy John Surgery in late September. Urquidy, however, did return, and a couple of the young arms stepped up and proved themselves as reliable starters before the season ended. By the time the postseason rolled around, the starting pitching wasn't a question mark, but a strength.

Greinke had an unspectacular but fine season. His 4.03 ERA was his worst since 2016, his first season in Arizona. While his ERA wasn't lights out, he was reliable. He threw 67 innings, which was in the top 25 of MLB. He had a 1.13 WHIP, which was in the top 20 of MLB. There are also some indicators that suggest how his ERA is bloated. FIP stands for Fielding Independent Pitching, which is a statistic that takes home run numbers, strikeouts, and free bases, basically everything that a pitcher can control, to give an ERA number. Greinke's FIP was 2.80. Greinke's xERA, which takes batted ball quality and puts it into an expected number, was 3.70.

Therein lies the story with Greinke. In a day and age where most pitchers are pumping gas, racking up strikeouts, but also giving away lots of free bases and long balls, Greinke is an outlier. Greinke's average fastball velocity in 2020 was 87.9, which was the fourth slowest of MLB starting pitchers. It was a two MPH dip from 2019, when Greinke averaged 89.9.

The dip in velocity did result in a spike of opponent production. Hitters batted .321 with a .536 SLG against Greinke's fastball in 2020. That's in line with a xBA (Expected Batting Average) of .305 and a xSLG of .581 against it. Hitters barreled up Greinke's fastball at an 11.8% clip, 3% worse than last year.

Where Greinke really makes his money is with the curveball and the changeup. Hitters batted .167 off of Greinke's changeup in 2020. Hitters whiffed 44.7% of the time at it, and when they did make contact, it usually wasn't hard contact, as the average launch angle was -2° with an average exit velocity of 88.5 MPH. Those types of batted balls are outs. The .321 SLG and .349 xSLG against the pitch weren't any better.

The surface level numbers against Greinke's curveball are a little less impressive, as hitters batted .265 against it with a .327 SLG, but a .206 xBA and .296 xSLG suggest hitters got lucky. The average exit velocity of 82 MPH was the lowest of any of Greinke's pitches.

Greinke may not throw hard, but he does a great job of mixing speeds, keeping hitters off balance, and missing barrels. The drop in fastball velocity is alarming, and he can't really afford to lose much more, but Greinke is a cerebral pitcher that knows how to evolve. He threw his fastball 41.2% of the time, while he threw his changeup and curveball a combined 42.9% of the time. Look for Greinke to start relying on his changeup and curveball more heavily while dialing back that fastball usage. He may not be a Cy Young candidate anymore, but he's still a really good pitcher that the Astros should be excited to trot out every 5th day.

McCullers returned to the mound in 2020 after missing the entirety of 2019 for Tommy John Surgery. It was McCullers' first time in the starting rotation since August of 2018, as he was relegated to bullpen duty down the stretch as he pitched through the torn UCL.

It was an up-and-down return for McCullers, who showed flashes of brilliance but also had some ugly outings. McCullers made 11 starts, pitching 55 innings with a 3.93 ERA. Aside from a 10-day IL stint for nerve irritation in his neck, McCullers stayed healthy, showing that his elbow issues were behind him.

The up-and-down nature continued into the postseason. Two of his three starts were duds, including the season ending game seven of the ALCS, but the other start was an absolutely lights out performance that should've resulted in a win if it weren't for Jose Altuve temporarily forgetting how to throw.

As was the case prior to his surgery, McCullers' curveball is the shining star of his arsenal. He threw it less (37.6% compared to 46.6%), but he still spun it well (89th percentile in MLB in curveball spin rate), and he still missed plenty of bats, as his 42.1% whiff rate against the pitch was 5% better than 2018.

McCullers fits the Astros mantra of velocity and spin, he is above average in velocity and is top of the line in curveball spin. Where 2020 gets ugly for McCullers is batted ball quality. McCullers gave up career high marks in Barrel % and exit velocity, and it showed in the numbers. His 4.71 xERA is considerably higher than his actual ERA. His 3.70 FIP was more in line with his ERA, but it isn't an elite number by any means. Hard contact hurt McCullers in the postseason. He gave up seven homers in 14.2 innings pitched.

McCullers either needs to miss more bats or miss more barrels. He hasn't used his four-seam fastball since 2017, opting for his sinker instead. He probably ditched the four-seamer since it placed more strain on his elbow than a sinker would, but now that his elbow is presumably fixed, he should consider using it again. Hitters didn't do particularly well against his fastball in 2017, batting .243 with a .429 SLG. Now that he has advanced feel for a sinker, it would make McCullers a more diverse pitcher that could pitch not just East-and-West in the strike zone, but North-and-South as well.

2021 is McCullers' last year of club control, and it will go a long way in determining the future track of his career. He legitimately has Cy Young caliber stuff, but if he continues to get roughed up, he may be destined for the bullpen and/or a different uniform.

Credit to @TurnerGivens, as he was the first person I saw that said Framber Valdez could step up to fill Justin Verlander's shoes.

With Verlander out for at least two weeks, the @Astros desperately need someone to fill a giant role. Replacing JV's spot w/ someone as dominant won't happen. However, they do have some viable options to keep them competitive. My top choice would be Framber Valdez, & here's why:
— Turner (@TurnerGivens) July 27, 2020

Valdez may not have been Verlander, but he was as good as anybody could have hoped for. He threw 70.2 innings of regular season baseball to the tune of a 3.57 ERA. His 3.81 xERA was close, but a touch higher. His 2.85 FIP, however, was in Greinke territory. He improved on that even more in the postseason, where he pitched 19 innings and only allowed five runs.

Where Valdez made the most progress in 2020 was strike throwing. He slashed his walk rate in half, going from 13.4% in 2019 to 5.6% in 2020. That's like going from having the control of former Cubs reliever Carlos Marmol to having the control of Gerrit Cole within one season. Valdez turned those walks into strikeouts, as his K% spiked from 20.7% to 26.4%. That's the difference between striking out hitters at a clip similar to Mike Fiers, and striking them out as often as Noah Syndergaard.

Similar to McCullers, Valdez has a curveball/sinker combo. His curveball is in the 96th percentile in spin rate, a trait the Astros often covet. Valdez's sinker isn't quite as firm as McCullers', but Valdez's has more movement and more spin. He's also left-handed, whereas McCullers throws from the right side.

There are still steps for Valdez to take. He isn't an "ace" as some are ready to crown him. He needs to miss less over the middle of the plate and hunt for the edges more often. Former Astro Dallas Keuchel is so effective because he lives on the corners. For instance, look at the difference in their sinker heat maps. (Valdez left, Keuchel right) 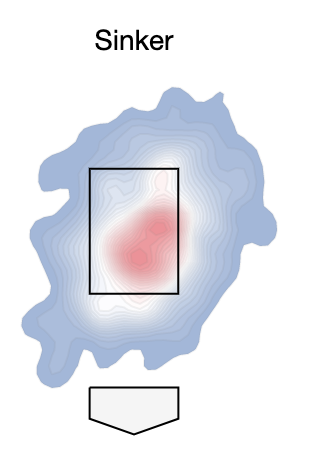 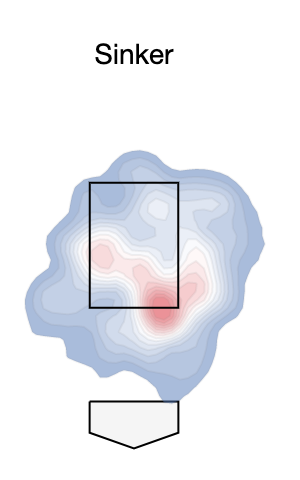 If Valdez can reign in that sinker, he might become the front line starter that the Astros thought McCullers would become.

It's tough to judge Urquidy on the numbers in 2020, as he missed a majority of the shortened season with COVID. Considering his small MLB sample size in 2019, there isn't a ton of data on the right-hander. However, his demeanor and quality postseason performance has cemented him as a reliable middle of the rotation arm.

Urquidy really put himself on the map with five scoreless innings against the Washington Nationals in the 2019 World Series. He would pitch 10 innings that postseason, allowing just one run.

On the surface, Urquidy was equally reliable in 2020. He had a 2.73 ERA and 1.01 WHIP in 29.2 innings. However, he had a xERA of 5.22 and a FIP of 4.71. Those two numbers suggest he got fairly lucky with his surface level statistics. His luck mostly ran out in the postseason, where Urquidy turned in a 4.02 ERA in 15.2 IP, however that's mostly due to one clunker against the Athletics in the ALDS. Aside from that, he was mostly steady.

So which version of Urquidy is real?

In 2019, Urquidy had a xERA of 3.76 and a FIP of 3.68, both better than his 3.95 ERA. This isn't the story of a guy that has outperformed predictive statistics in two consecutive seasons. Aside from his slider, which dropped 3 MPH in average velocity, the rest of his pitches were either the exact same or within half a MPH in average velocity.

Considering the circumstances of 2020, it is perfectly plausible that Urquidy's stuff might not have been as sharp following a long COVID layoff and a total lack of a ramp-up period. If his 2021 numbers are more in line with 2020, then he may not be the reliable arm many view him as, but if they return to his 2019 line, then he'll be a bulldog in the middle of the Houston rotation.

Cristian Javier is a statcast darling. Just take a look at his percentile rankings.

Essentially, absolutely nobody hit Javier hard. His .185 xBA is minuscule. His 2.94 xERA? Similar story. Both numbers are better than his 3.48 ERA and 0.99 WHIP, which are already two pretty spectacular numbers for a 23-year-old rookie. 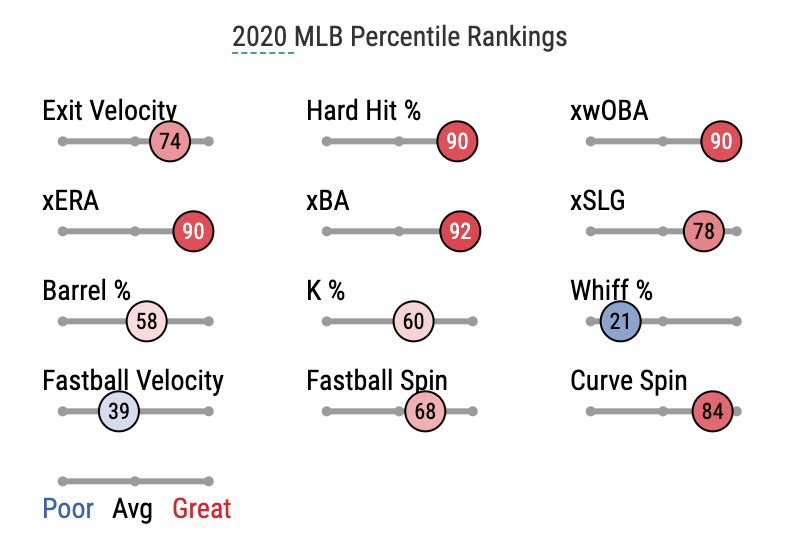 While Javier doesn't have elite fastball velocity, he has above average spin, giving his fastball some "ride." Essentially, the ball looks like it's rising to the hitter, even though it isn't, and it's exploding through the zone. While Javier might only throw 92-93, it probably looks more like 95-96 to the hitter. Javier combines that with a breaking ball with really plus spin, and he can throw it on two different planes.

For a 23-year-old, Javier has great feel for four pitches, controls the strike zone, and controls hard contact. The lack of plus fastball lets him slide under the radar more, but he could legitimately blossom into an All-Star.

The Astros have five starting pitchers that they can feel happy about heading into 2021. Greinke is a steady veteran atop the rotation, while McCullers is another veteran that will provide reliable performances while having room to grow. Valdez may have more peaks-and-valleys than Greinke and McCullers, but if he can lock in some sinker command, he could become the best pitcher on the staff. Urquidy has shown himself to be a reliable mid-to-back end of the rotation arm, and 2021 will go a long way towards confirming that. Javier is more under-the-radar than lots of the other young Houston arms, but he might have the most potential out of all of them to really stand out next season.

Let's discuss the worst excuses for getting caught using PEDs

How everything changed for the Texans’ timeline at this pivotal moment

Here's where the Texans rank among head coaching opportunities

The Houston Texans will be among as many as 9 NFL teams in the off-season looking to fill their head coaching vacancy. Where does that opportunity rank among those 9? Make sure you watch the video above as we break it all down.