How a deep dive reveals something unexpected about the Astros bullpen

Grayson Skweres
Oct 30, 2020, 4:46 pm
The Astros now have several arms they can depend on. Photo by Harry How/Getty Images

Most people considered the Houston Astros bullpen to be the team's biggest hole. Considering Will Harris and Hector Rondon left in the offseason, while no veterans were brought in to replace them, Joe Smith opted out of the shortened COVID season, and Roberto Osuna threw less than 60 total pitches, it makes sense that the 'pen would be thin. Even former bullpen mainstays like Chris Devenski, Brad Peacock, and Josh James missed most or some of the season with injury. The exodus of talent and numerous trips to the IL presented some young arms with an opportunity, and a handful of them seized those opportunities.

The advanced numbers say the Astros should be comfortable with Pressly as their closer next season. Pressly's 2.74 xERA (Expected ERA) was lower than his ERA, and same with his 2.81 FIP. Pressly was even better in his 7.1 postseason innings, when he had a 2.45 ERA and 1.42 FIP.

Pressly was in the 99th percentile in curveball spin. Only Garrett Richards and Lucas Sims had higher spin rates on their curveballs. He was also in the 95th percentile in fastball spin, and he pairs that with average fastball velocity of 94.6 MPH.

All-in-all, Pressly does a great job of limiting damage and free bases while missing bats. His walk rate spiked in 2020, but it was back in line with his career norms by the postseason, signaling that the walk issues could be tied to the quick ramp-up of Spring Training 2.0. Aside from that, the numbers being as high as they are (which aren't even that high), seems to stem from some bad luck.

Paredes burst onto the scene in 2020, bailing the Astros out of tough situations with electric stuff and moxie. By season's end, he was the team's second most reliable reliever behind Pressly.

Was Paredes' breakout a fluke or is he legit?

Similar to Pressly, Paredes is elite in two categories: velocity and spin.

Paredes has a release point just 5.1 ft off the group. He's an old school "drop-and-drive" pitcher, so despite being 5'11" tall, the ball comes out of his hand nearly a foot lower than that to the ground. His fastball explodes out of his hand with incredible life, and it's why he got so many swings-and-misses on a fastball that he threw 68% of the time.

All that being said, Paredes is only 25, has incredible stuff, a great attitude, and the best pitching coach in baseball to aid his development. As he continues to develop his secondary pitches, he should continue to be a reliable arm in the back of the Astros bullpen.

Blake Taylor was another young arm that entered Dusty Baker's circle of trust by the end of the season. Acquired in the Jake Marisnick trade, Taylor was considered an afterthought, but by season's end he was considered a great parting gift from Jeff Luhnow.

It is a little perplexing how he does it. Taylor is roughly average in fastball velocity, and he's exactly average in fastball spin. Same with his breaking pitches. Taylor doesn't have unique pitch usage either. He threw his fastball 76.5% of the time and his slider 22.6% of the time, essentially making him a one pitch guy. Most hitters are eliminating his slider and changeup (he threw it 0.9%) before they step into the box. Most hitters would salivate over an at-bat with those odds at average velocity, but hitters didn't have success.

Taylor doesn't do it with pinpoint control either. He walked 5.23 per 9, and he certainly didn't live on the edges.

He didn't experience success in a stereotypical Astros way, as they usually rely on velocity and spin, but his ability to induce soft contact is impressive. Similar to Paredes, there are reasons to believe Taylor can develop and continue to get better.

Andre Scrubb is yet another arm that didn't figure to factor into the Astros 2020 plans, but by the end of the postseason, was one of the more trustworthy relievers on the roster.

Scrubb is closer to the mold of the stereotype Astro pitcher. While he doesn't have overwhelming velocity -- he was exactly average -- he does have slightly above average fastball spin and well above average curveball spin. The lower fastball velocity and spin probably stems from the fact that he doesn't throw a true four-seam fastball, opting for a cutter instead.

Scrubb is heavy on curveball usage, and he was nearly 50/50 between his cutter and his curveball. The cutter and curveball play well off of one another, as one pitch has some glove side run to it while the other is essentially a true 12-6 curveball.

Scrubb didn't rack up lots of strikeouts, yet another league average category for him, but he did rack up a ton of soft contact. He was in the 99th percentile in Hard Hit % and 92nd percentile in Barrel %.

The .195 xBA and .298 xSLG against him explain his 1.90 ERA. He limited damage so well that, despite being average in totally missing bats and walking batters left and right, he usually left the game having not allowed anyone to score.

Both xERA and FIP agree that Scrubb got lucky, as xERA has him at 4.06, while FIP has his at 4.25. Regardless, those two numbers aren't even all that terrible for a middle reliever, especially one that had never pitched above AA prior to 2020. He has to lock in on his command, as a pitcher that walks 7.61 per 9 will never have a long track record of success. If he can learn to be around the plate more, he's another arm the Astros can count on for the long haul, as he is 25-years-old like Taylor and Paredes.

Brooks Raley entered the 2020 season with the Cincinnati Reds before being DFA'd after just 4.0 IP. The Astros liked what they saw enough to trade away a PTBNL for the DFA'd left-hander, and he performed well enough that the Astros will likely exercise his $2M club option for 2021.

What did the Astros see that they liked so much? Well… what if I told you he spins the ball well?

Raley was in the 93rd percentile in fastball spin and 94th percentile in slider spin. Brooks Raley doesn't throw hard, as he only averaged 90.1 MPH on his fastball, but he does command the ball well, as he had a 2.70 BB/9.

The other impressive part is that, despite barely throwing 90 MPH, he missed a lot of bats too. He was in the 87th percentile in MLB in K%. His 12.2 K/9 was the same as Kenley Jansen's.

The Astros found five relievers worthy of roster spots in 2021. Josh James had a poor season in 2020, and his time to put it together is running out, but he still has an intriguing combination of velocity and spin. James battled injuries in 2020, and the poor performance could be tied to that.

On top of those five arms and a possible sixth in James depending on health, the Astros will add Joe Smith back to the fold in 2021. Smith is a reliable veteran arm. While the sidewinder doesn't bring the typical velocity or spin to the table like the rest of the Astros arms, he does bring something to the table that James Click will bring with him from Tampa Bay...funky looks.

Here were the release points of Rays pitchers from the catcher's point of view versus the Astros in the playoffs (Chart via MLB.com). 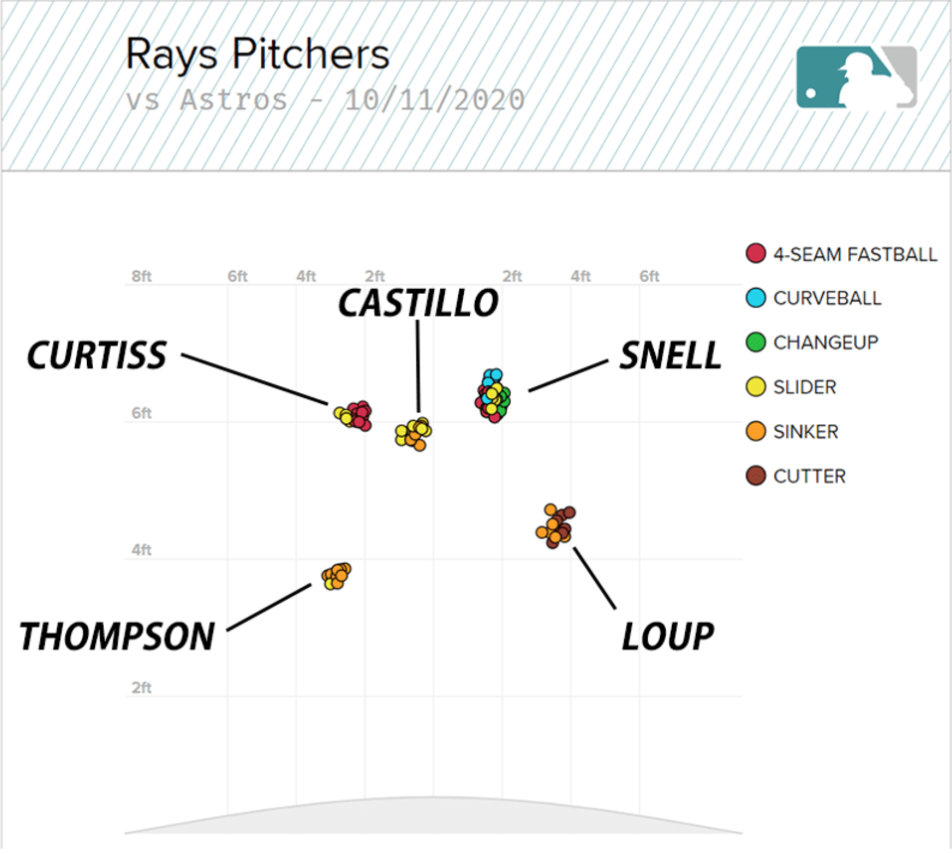 Now...here's the Astros bullpen pitchers discussed in this story. 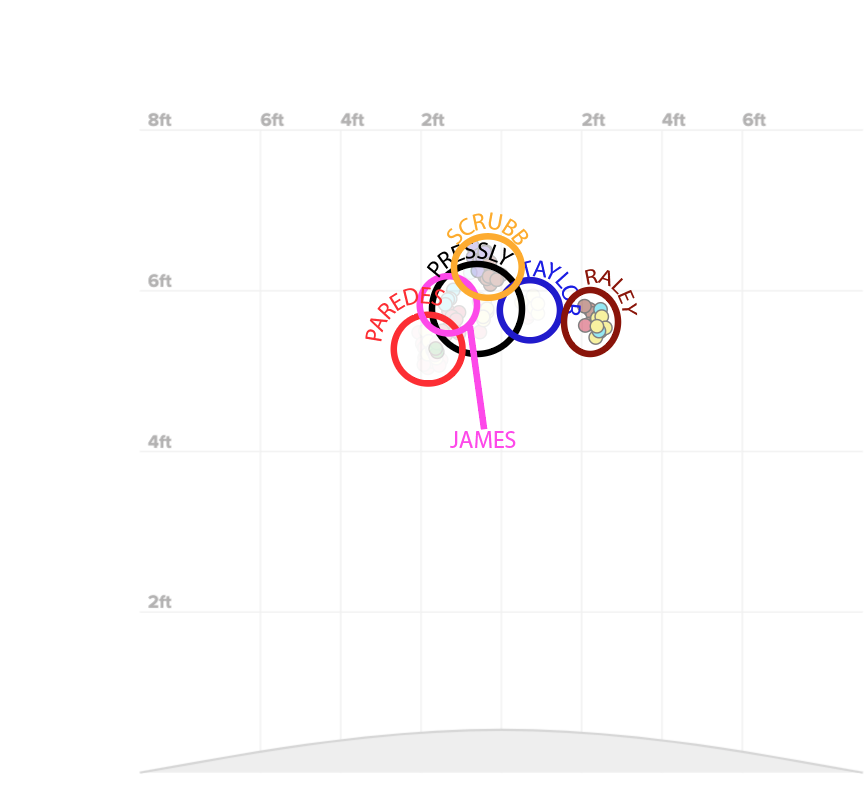 There's not exactly a ton of difference. Now look at the element Smith brings to the table. 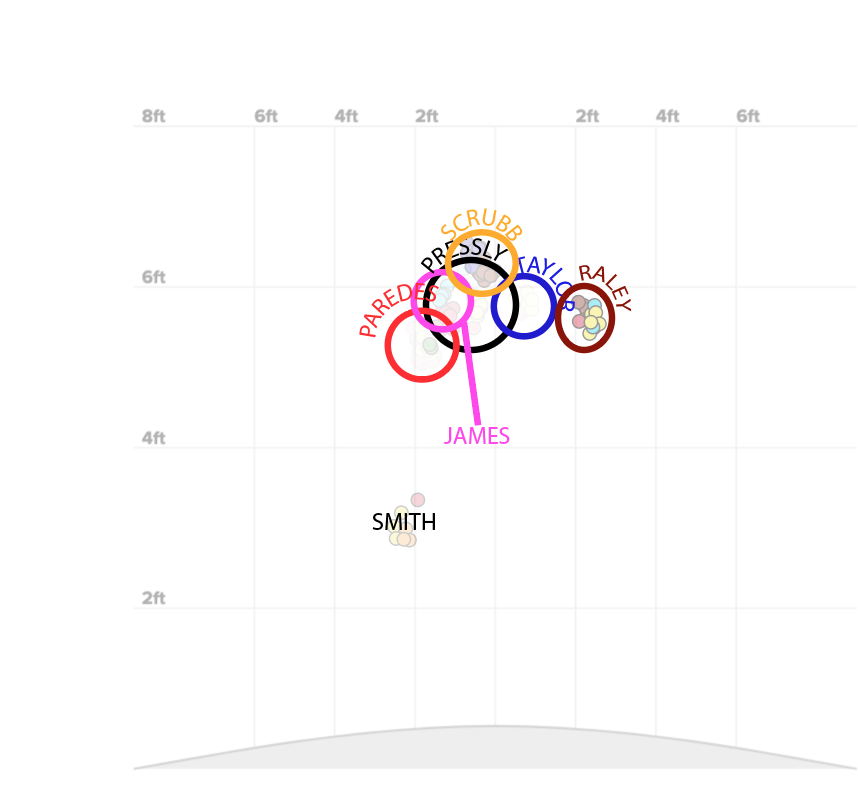 Houston does need to add a couple of bullpen arms in the offseason, but they already have six or seven they can rely on. Look for Click and Co. to add arms with diverse release points, plus velocity, and plus spin.

How latest Verlander news is giving off Carlos Correa vibes

We have official news on Justin Verlander's future

Steven Devadanam
Upton and Verlander are headed to the Big Apple. Photo by Elsa/ Getty Images.

According to the New York Post, Verlander, a free agent, agreed to a two-year, $86 million deal with the Mets, with a vesting, third-year option for $35 million. While that's huge news in the world of pro baseball, Verlander's superstar model wife Kate Upton has been also trending on Twitter.

No surprise there, as cover girl and fashion influencer Upton boasts more than 6 million followers on Instagram alone and one of the most followed models on the globe. But it's not a cover shot or sizzling bikini pic making the rounds, but rather, a video of the supermodel shooting the bird to Philadelphia Phillies fans.

Upton, an oft-smiling mom and wife, had no problem backing down from Philly Fan with a double-barreled, middle finger salute. While the audio is hard to decipher, we're guessing Upton didn't edit her smack talk in the dubious City of Brotherly Love.

Plenty of local talk (if one is interested in that sort of thing) points to the Mets being the team for "real" NYC baseball fans, while Yankees fans are said to be band-wagoning, late to games, and full of corporate partners. It's also good optics that Verlander didn't bolt for the team that the Astros dispatched in a four-game sweep on the way to their second World Series title.

Houston fans will no doubt miss Upton, who wed Verlander, gave birth to darling daughter Genevieve, and essentially broke the internet when she donned a retro Astros jacket — making it an instant sellout — all while here in the Bayou City. As transplants from there regularly point out, Houston is notoriously friendlier than the Big Apple.

But, something tells Upton, who has proven that she's not afraid to go publicly potty-mouthed in defense of JV, will have zero problem handling any mouthy NYC fans.