The anticipation is over, the World Cup has arrived. Well, let's be serious, the opening day of the tournament is nothing but a tease with the unpleasant opening ceremony, followed by a less than stellar matchup between the host nation Russia and Saudi Arabia.

The game was somewhat of a surprise, not so much by the team that won, but more of the fashion they did it in. Russia got off to a hot start netting five goals and a leg up in the group. The goal differential will be crucial when it comes down to group winners. Look for Uruguay to come out serious, knowing that second place in this group matches you up potentially with France in the round of 16. Saud Arabia looked extremely vulnerable and will be the group's punching bag.

The opening game to the tournament saw five total goals, with over backers laughing their way to the cashier. Historically, betting overs in the opening game of the group stages has been a bad idea. The element of playing in matches with stakes so high tend to make international teams play somewhat more cautious. This is especially true early in tournaments when teams are still getting accustomed to the stage and not making mistakes is a the top of every player's mind. Over time, the first group games have shown us to have less amount of goals than other stages of the competition. 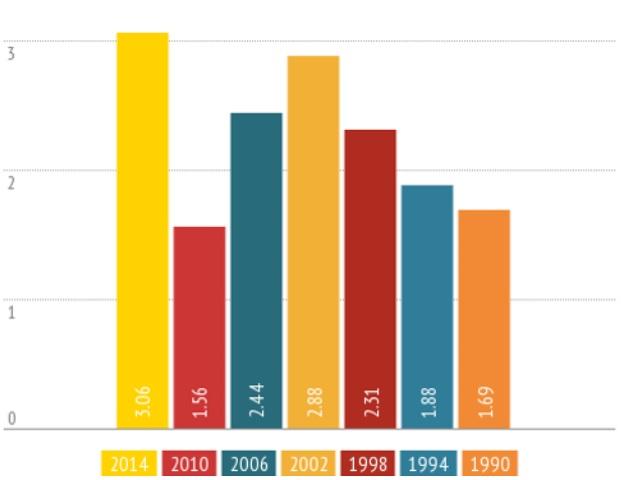 As you can see, only twice since 1990 has the average been higher than 2.5 goals per game in the first match of the group stages. Brazil 2014 saw a record amount of goals averaging 3.06 per match, and we saw that carry over to Thursday's match.

Gamblers tend to have a short memory, and many will gravitate to backing overs with the success as of late in opening matches. I expect a regression at some point and the numbers getting back to normal, so tread overs carefully as the first week unfolds.

For any questions or comments reach me @JerryBoKnowz on Twitter

Why the Houston Texans should clean house after the latest debacle

Here's why we could see an Astros trade moratorium

ESPN Houston's The Killer B's discuss the Astros vacant GM position and question if the team will make any trades this offseason before a new GM is hired.