Keys to being a winning sports gambler

The NFL season has come to a close and now degenerate gamblers (like myself), turn the page to other sports. In the gambling world, football is king and handles the most bets and money wagered. Let's take a look how other sports measure up during the regular season:

Total amount bet on each sport 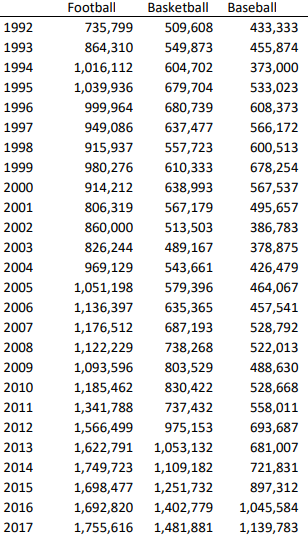 According to the UNLV center for gaming research, from 1992-2017 the order regarding handle for the dominant sports:
Football
Basketball
Baseball

Over the years, NFL has dominated, but according to well-known bookmaker Jimmy Vaccaro, NCAA football has gained ground in the past few years. Professional football leads the way, and maybe it's the fact that the stage is set up perfect for the NFL to display its product. During the season, the week gives fans several chances to watch and bet Nationally televised games on Monday, Thursday and Sunday nights. Not only that, but Sundays also provide us with the opportunity to end our week with over 10 hours of games. College football gives us a full Saturday slate with mediocre games during the week.

Professional football gives us the least amount of games with 256 scheduled contest in a season. The NBA schedules teams for 82 games during the regular season giving us 1230 games to bet on. The MLB takes the crown in length, where the season consists of 162 games for a yearly total of 2,430.

Does the number of games in a season for each given sport affect the popularity in terms of wagering? Let’s take a look how much books won on each sport. 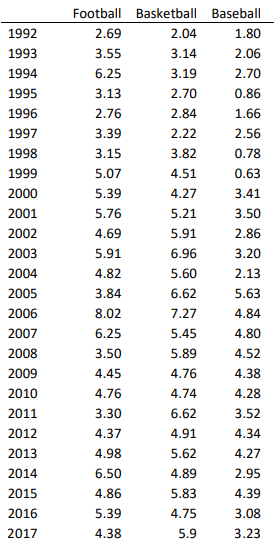 With the exception of a few years, Basketball regularly holds the highest win percentage for casinos. Just last year, basketball profited almost twice as much as baseball. Again, the variance in basketball is what makes it tough. A vast percentage of NBA and NCAA games are decided by free throws and fouls in the closing moments. In the NFL, the way the scoring system is set, we know what to look for. Scores come in increments of 3 and 7 (rare safety 2). This makes it easier to predict what scores are needed in the closing moments of the game.

For example, Team X leads by 7 points. The opposing team holds the final possession. Team Y won't settle for a field goal knowing they need a touchdown and extra point to tie the game. With the scoring set this way, the key numbers of  3,7,10,6 and 4 are vital.

In Basketball, close games are measured more by the number of possessions that separates the two teams. In a 2-3 point game, teams know they can win or tie it up with a single shot. In the 4-6 point range, it takes two possessions. Knowing this, the end of basketball games are very unpredictable as teams will foul and extend games trying to maximize their chances of coming back. Late free throws and bad fouls can decide whether or not you cash tickets.

Baseball has the less variation and that’s why it holds the best value in terms of betting. Most run lines in baseball are set at 1.5, giving actual weight to each run. All three competitions are considered "team" sports, but when handicapping baseball the greatest unit of measure used is Pitching vs. Batting matchups, making it somewhat of a 1 vs. 1 contest. Yes, fielding, base running, and other things factor in, but when you narrow it down, Pitching advantages are what drive the final number. In football and basketball, it takes more to be in sync as a whole. Also, the MLB season gives us many more chances to bet making the sample size bigger when tallying up final numbers for the year. If you consider yourself a good bettor, then opportunities are what you're looking for.

Sports betting should be treated as a long-term investment. Most recreational gamblers risk too much of their bankroll on single games. The difference between a novice gambler and a pro is the professional possesses a bankroll separate from their other finances. From that total figure, a pro gambler can spilt up their plays into percentages of the total bankroll. You see all the time where sports touts are claiming 10-50 unit plays, that’s absurd. Using that theory, a tout can go 1-4 but still profit, if the one play was larger than the rest. While that sounds appealing, flip it around, and you can also lose by going 4-1 if the one loss was bigger than the other plays combined. Making some plays abnormally large makes it difficult for a gambler to be consistent over time.

Overbetting is the most common mistake made by gamblers. Many systems recommend making plays 1% of your bankroll. How many times do we see wagers of $100? Wagering a Benjamin would mean that your bankroll sits at $10,000, and how many actual gamblers are sitting on that much separate from other finances?

It's a long race, far from a sprint. Take your time and never chase losses. Stick to a method of betting that works for you and follow it consistently. If you do it just for fun or to "make the game interesting," by all means step outside and take your chances. But, if this is what you plan on doing for an extended period and rely on as an income, read into the numbers and give yourself the best odds at winning long term.

For any questions or comments reach me @JerryBoKnowz on twitter

Astros set to bring back a familiar face

Report: Rockets roll the dice and make a deal with the Cavs

Adrian Wojnarowski is reporting that the Rockets traded a 2nd round pick to the Cavaliers for Kevin Porter Jr. on Thursday night. Hopefully, his difficulties off the court can be solved and it works out for the Rockets.

Porter, the 30th pick in the 2019 Draft, has had difficulties off the court both in his time with the Cavaliers and in college at USC. The Cavaliers were ready to move off his salary. For the Rockets, he's clearly a reclamation project. https://t.co/dOtRdjVvA6
— Adrian Wojnarowski (@wojespn) January 22, 2021