Up for whatever? How about an evening with the Houston Tourism Gym's hospitality tour?

Courtney Sellers
Jun 15, 2018, 2:53 pm
The "Up for Whatever" Tour gives you a chance to see the Houston scene both day and night. All photos by Courtney Sellers/SportsMap

Houston hasn’t been widely known as a tourist destination, no one will argue that. People aren’t necessarily clamouring to come visit The Bayou City like they are Austin, San Francisco, or New York. The immense sprawl of Houston coupled with the suffocating heat and humidity doesn’t invite people to go exploring around town. Jovan Abernathy is trying to change that image with her “Up for Whatever” fitness tours.

Abernathy, owner of the Houston Tourism Gym, is a native of the Houston area and has been in the hospitality industry for over 20 years. She also runs international marathons, which was the catalyst of a blog she wrote - I Hope I Come Back Alive - about touring unique countries. The success of that blog, coupled with her desire to give people a unique look at this city inspired her to start the Tourism Gym.

Abernathy said that during her time in the restaurant industry, she would frequently have customers from out of town, and they would always ask her: “what do you guys do here?” Her answer was always “eat!” From this, the hospitality tours of Houston was born. Most people are on a quest to find something they love and do it for a living. Abernathy knows hospitality, she can make connections with anyone she meets; her presence is inviting, fun, and she’s extremely personable -- the perfect person to show you around the city. She’s also good at exercising, having trained people for marathons and long distance races. Her tours are like a mini marathon training: about five to six miles on foot, over hills and different terrains, but walking instead of running allows for conversation about the city.

We met Abernathy at Holler Brewery, located in the same complex as Spring Street Studios in historic First Ward. Holler is a small brewery, and you can take your beer out onto their covered walkway and down into the back area where the walls are covered in art from artists like Vincent Fink, Anat Ronen, Jessica Rice, and many more - some of which have studio space at Silver Street studios and nearby Summer Street Studios. Abernathy talks a bit about the artists that are featured, the impetus to turn this area into Houston’s next art epicenter, and about events that they hold here. As a big fan of street art, I appreciated hearing more about it and the artists that call Houston home. Houston doesn’t jump out as a destination when people talk about art, but there are a ton of hidden gems around the city, and this was one I really enjoyed. 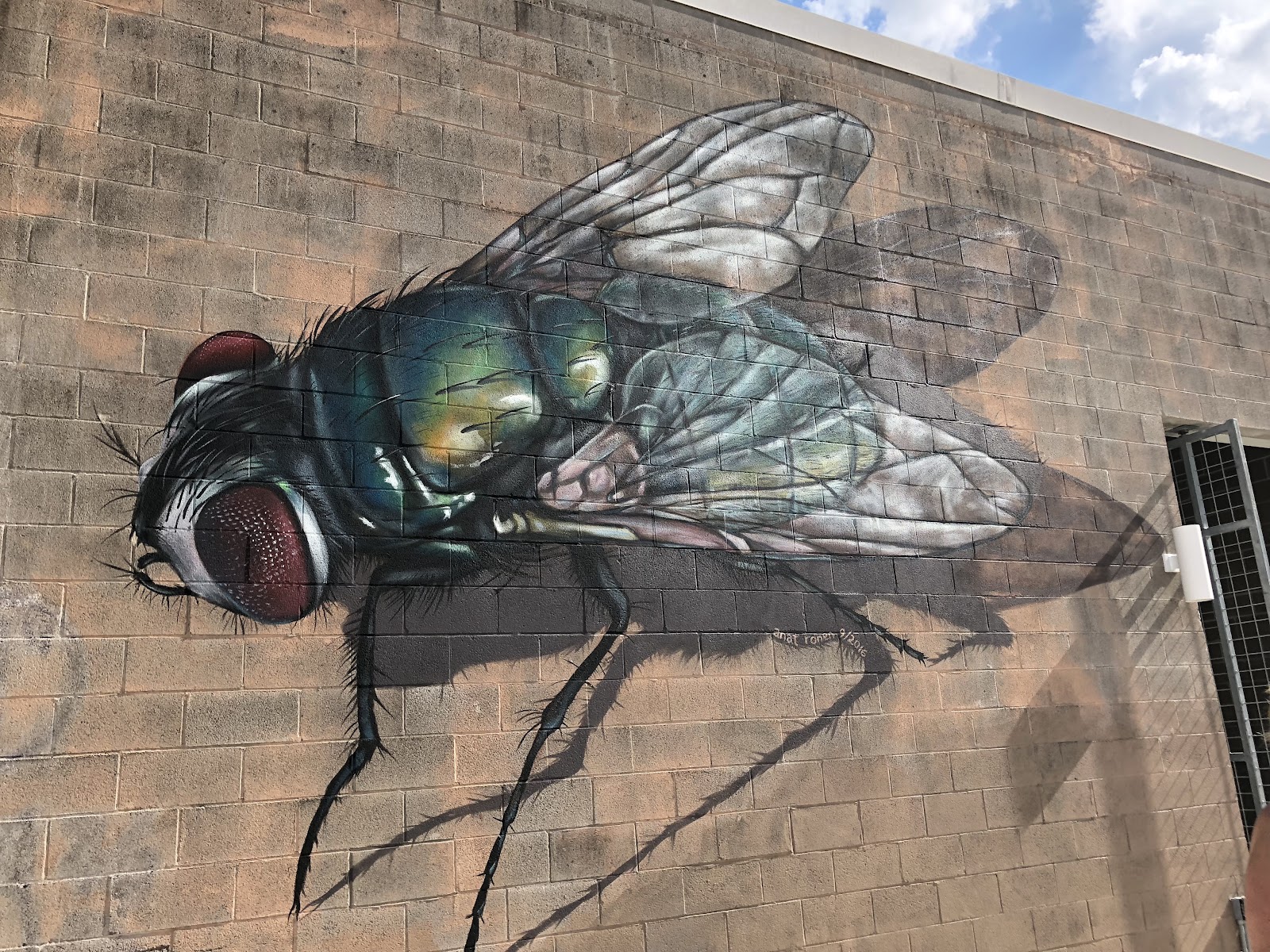 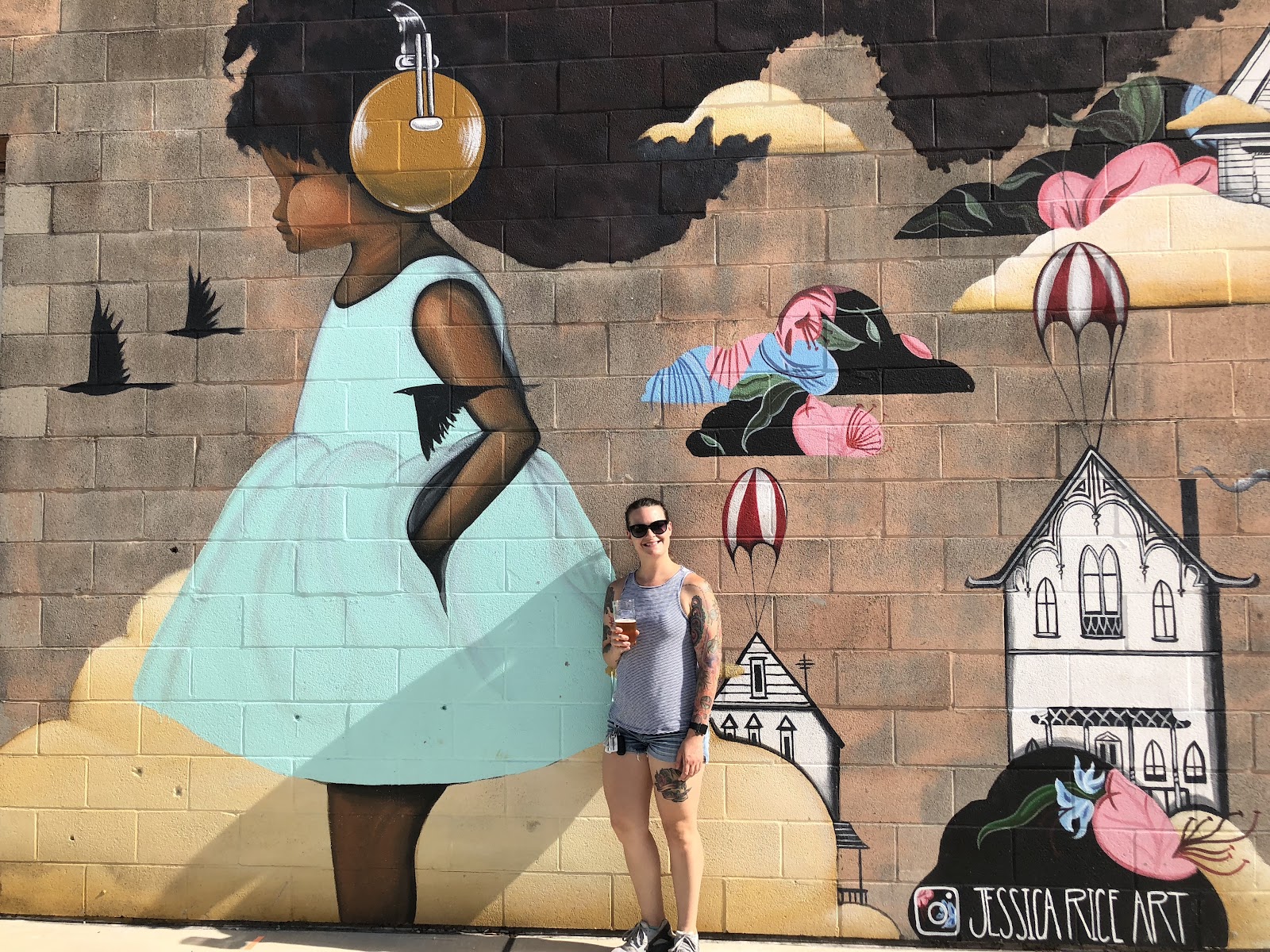 We then take off down Sawyer street in the direction of downtown. We pass Beavers and walk a bit through the neighborhood where Abernathy points out the historic street signs and talks a bit about The Blue Tile Project. Abernathy doesn’t blurt facts out at you as you’re walking, rather there is a lot of free flow conversation about the neighborhood and the area in general. She works each individual’s interests about the neighborhood into the tour. As someone who values structure but not needing to have strict control over every aspect of my time, I really enjoyed the casual nature. Our walk through the neighborhood spits us out onto Memorial and we cross the pedestrian bridge into Buffalo Bayou Park by the Lee and Joe Jamail Skatepark. By this time it’s about 6:00 pm and the park is vibrant and loud. Skateboarders are heading into the skatepark, people are jogging or walking their dogs, and an ice cream truck is set up selling wares. 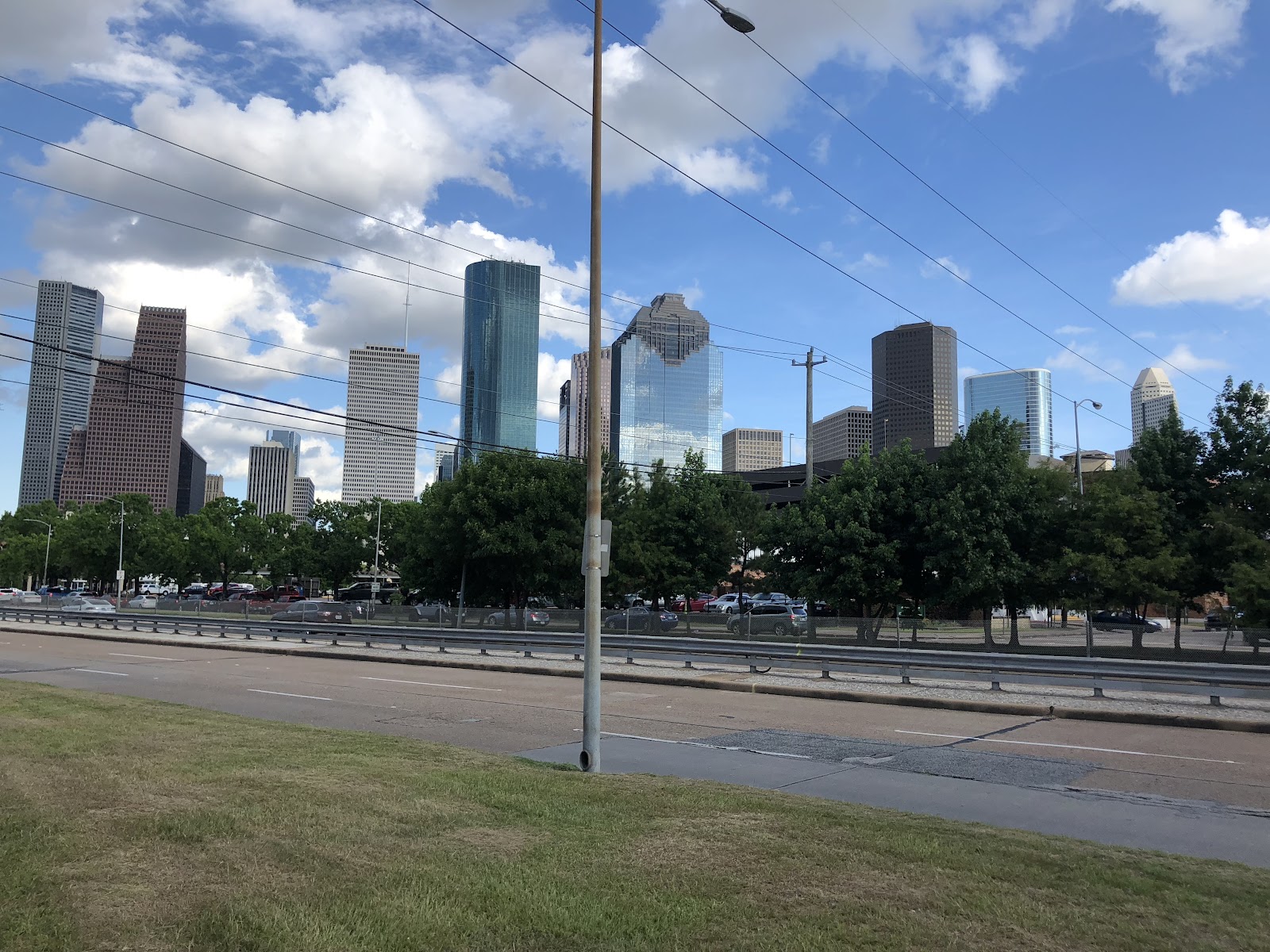 We stop at the Buffalo Bayou Park Cistern - a former drinking water reservoir that now houses art and cultural exhibits and Abernathy spends some time talking about its history and cultural significance. We head through the park and just before we get into the heart of the city we notice clothes and other linens still left from Hurricane Harvey, hanging down from the I45 overpass as it goes through downtown over the bayou. Standing there under the bridge, seeing how high the water was as it flooded into downtown is jarring. We pass the Aquarium, climb the stairs up to Preston Street, and Abernathy chats a bit about the area stopping at a red button. The button is called The Big Bubble and makes the water down in the bayou start bubbling up. The mechanics are under construction, but if you think that stopped me from pushing that button you’re out of your mind.

We continue east toward Main Street, stopping to hear a fascinating story about the founding of Rice University and then through Market Square Park. It’s hard to believe the transformation this city has gone through over the past fifteen years, but traversing it slowly, and on foot, the changes are magnified. Our next stop is Local Foods on Main Street right at the Preston Street light rail stop. It’s still Happy Hour and the restaurant is bustling with people winding down from their work week. The General Manager, Vincent Torres, comes over and talks with us a bit while we enjoy drinks and get off our feet. This break is an absolute necessity for a walking tour in this city. I’m starting to get really sweaty but even 20  minutes in the air conditioning gave me a big boost. 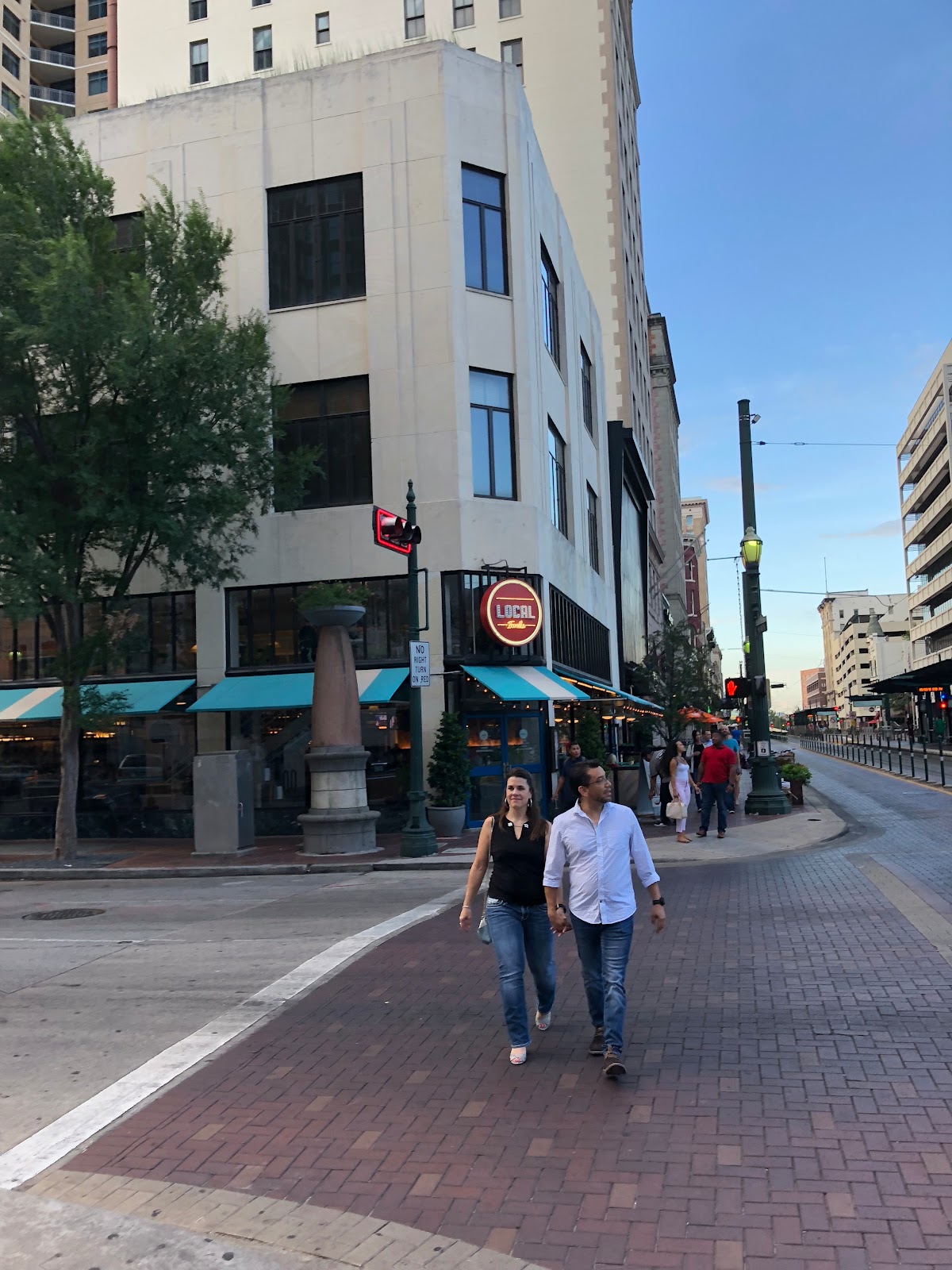 We leave Local Foods and downtown is still buzzing. Again, I’m reminded that 15 years ago this city would have been deserted by 7:15 pm on a Friday night. We continue East, walking along Main St and through Discovery Green, stopping at the recently remodelled George R. Brown and the hanging art on Avenida De Los Americas. Our next stop is BBVA Compass Stadium, home of the Dynamo and Dash located in East Downtown. Jay Adelberg, our unofficial stadium tour guide, takes us in the front doors where we’re immediately met by the two MLS Cups the Dynamo won in their first two years after relocating from San Jose. Adelberg is a big soccer fan, and his enthusiasm for the team is really infectious. He shows us “El Capitan,” a civil war era cannon that the winner of the match between Houston and FC Dallas takes home. It’s similar to the Silver Boot trophy that the Astros and Rangers play for each year, and is taken very seriously by players and team personnel. I love a little in state rivalry. We go onto the field level to take pictures and then into the locker room for a tour of the facilities. 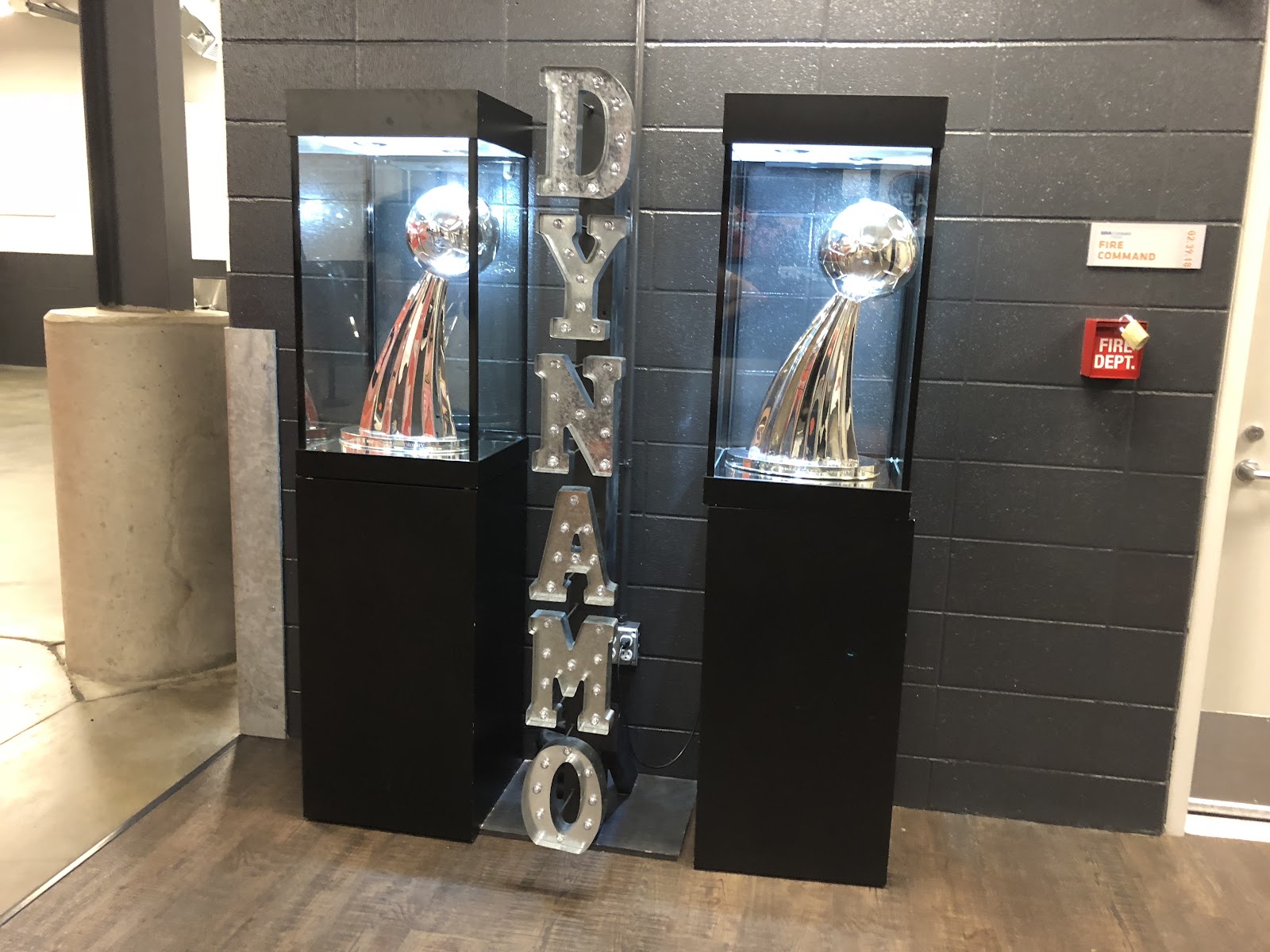 After leaving the stadium, we walk north through the neighborhood, which is also full of people heading out for the evening. East downtown is the last area to experience mass gentrification, but the city seems to have learned a bit from it’s mistakes in Montrose, Fourth Ward, and other historic neighborhoods by keeping some of the local culture intact. We find ourselves in Graffiti Park and this is not hyperbole - I was dumbstruck. Graffiti Park is exactly as it sounds. It’s the parking lot of an old building complex covered in street art from local artists. The first thing I saw was a beautiful mural of Selena surrounded by roses by the artist Empyre. Next a tribute to Big Moe and the legend Pimp C that is so lifelike you would swear it’s a photograph. As I’m walking through the Park in complete awe, a group of teenagers pulls up, jumps out of their car, and runs over to the mural for pictures. If you love street art, this is the place for you. By now it’s 8:30 pm and the sun is starting to set, so reluctantly I agree to leave Graffiti Park and we head back into downtown - where our last stop is the rooftop bar at Le Meridien hotel. 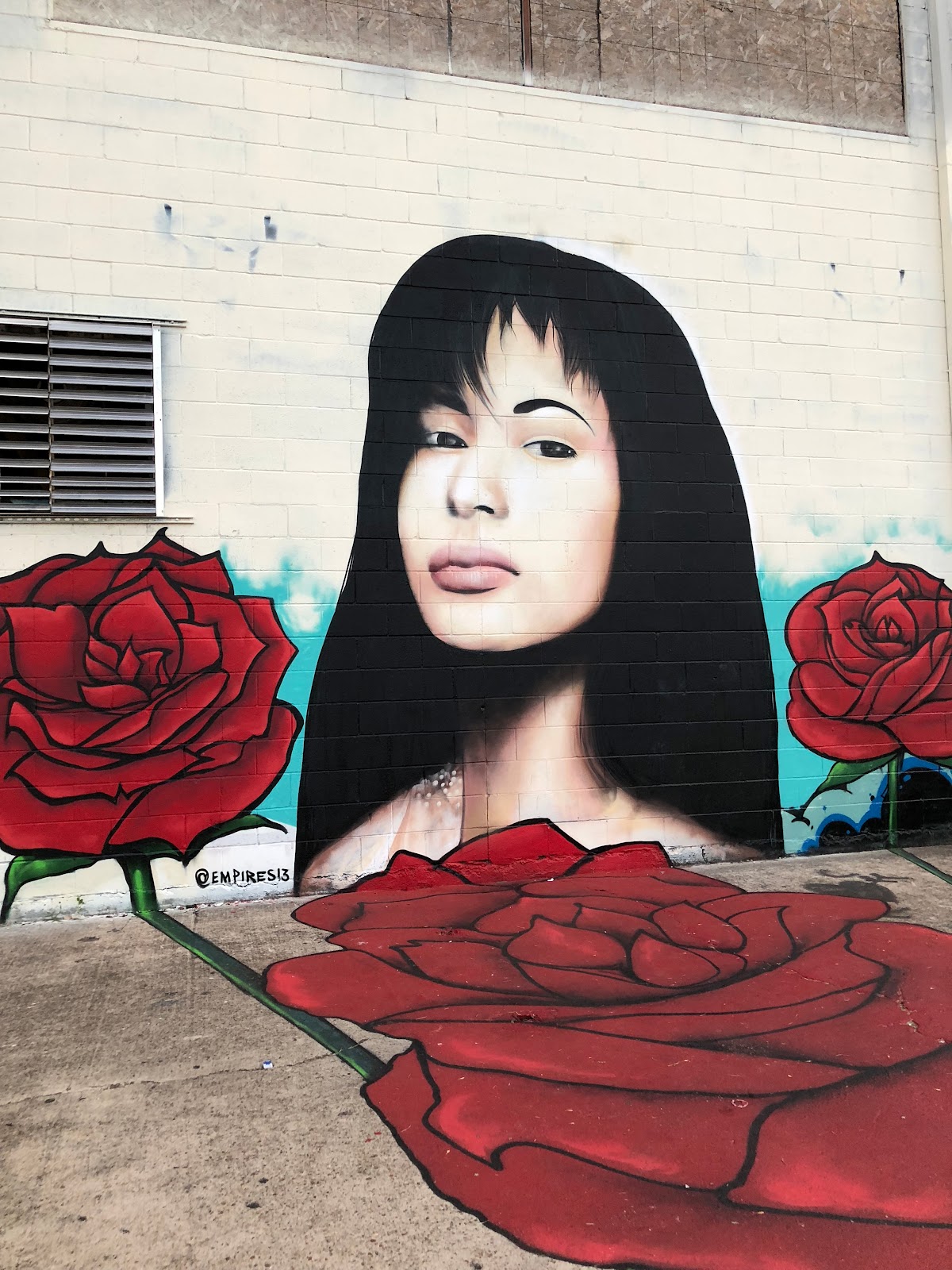 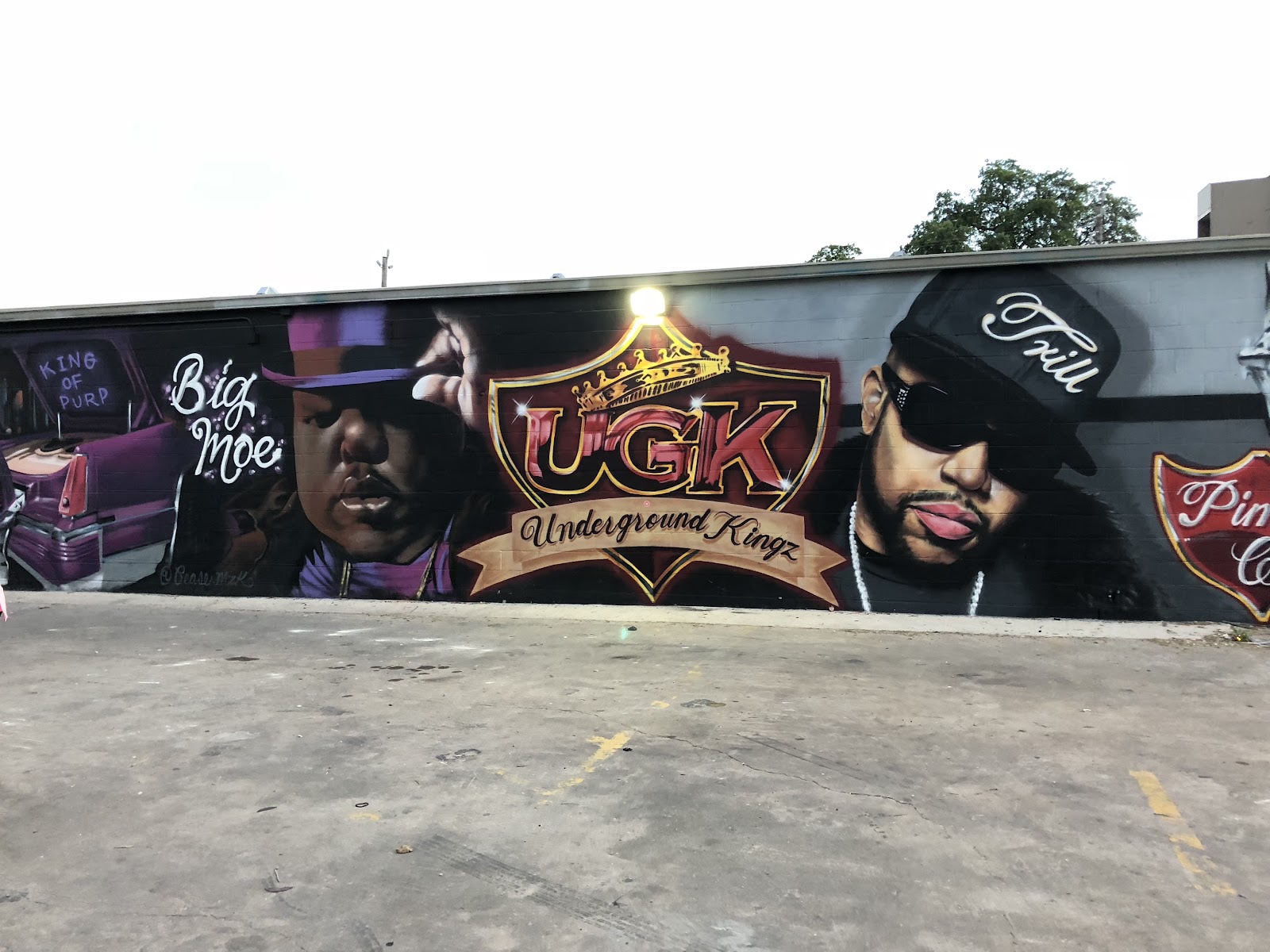 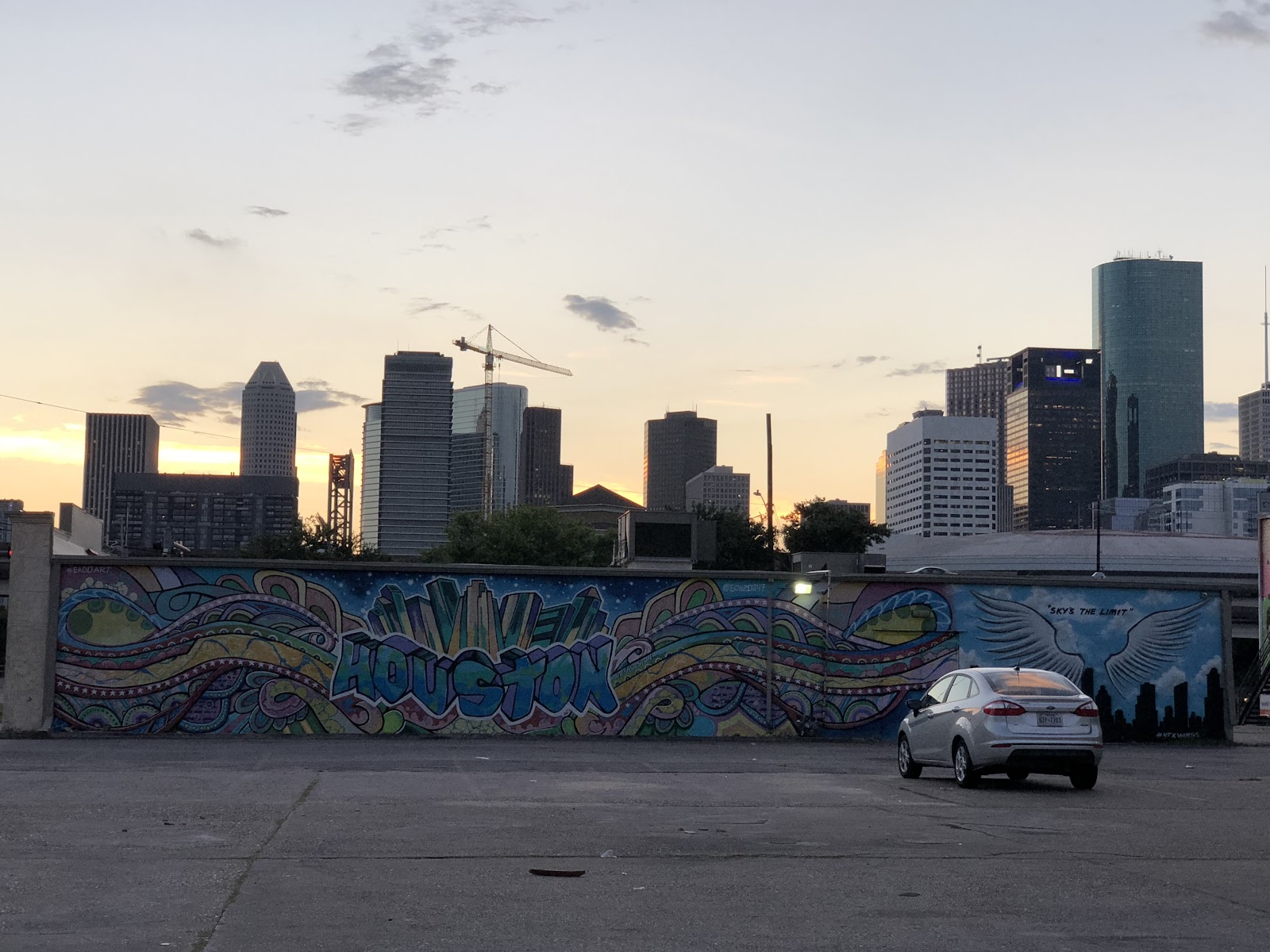 The walk to the bar takes us back through Discovery Green, and all the colorful murals on Avenida De Los Americas are lit up in a beautifully vibrant rainbow of colors - Houston’s transformation from day to night is complete. 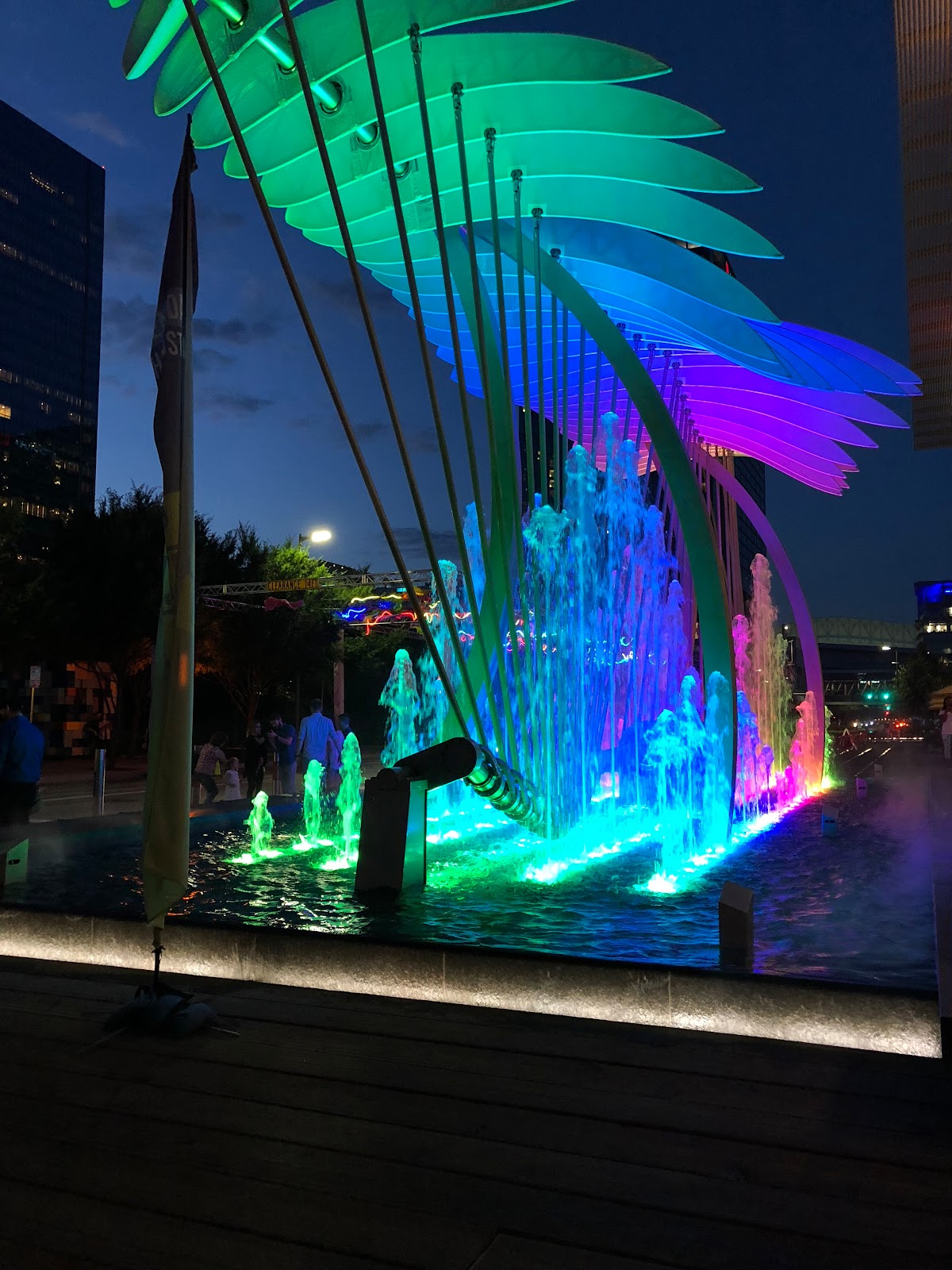 The view from Hoggbirds, the rooftop bar of Le Meridien, is breathtaking. The sun is just about down and the purples and dark blues make the lights of the city even more dramatic. I love the diverse vibe of this bar. An older group of couples watching the NBA Finals, some yuppies in Forever 21 having a couple of drinks before they head out for the night, patrons of the hotel seeing Houston from a different perspective, countless first dates, and us in our workout gear not even feeling a bit out of place. We spent the next hour or so chatting about the tour and getting to know each other more. Jovan is open to any and all ideas on how the experience could be better, she truly wants to show people bucket list items in Houston and the different cultural experiences here. About 10 pm we call an Uber, head back to our cars at Holler, and I head home to soak in a bath of epsom salts. 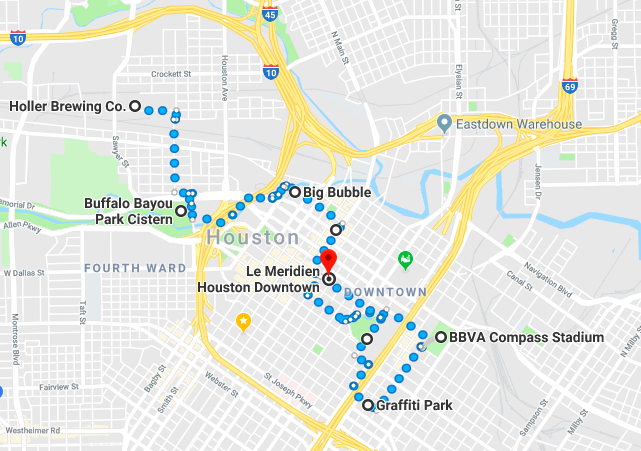 The folks at HEB are back at it again and this time they tapped rookie Jeremy Pena to join Alex Bregman, Lance McCullers Jr, and Jose Altuve. Be sure to check out all the videos and let us know your favorite in the comments.

HEB and the Houston Astros