The holiday season is upon us, so don't play favorites when fancying gifts. Have an open mind and give from the heart.

In the the world of NFL gambling, doing the complete opposite has been the formula for cashing tickets lately. Playing teams favored and using the "what have you done for me lately mindset," has shown to be profitable.

Favorites have been on an extraordinary 54-24-7 run since the start of Week 7.  Just in November, teams favored are 37-15-4, closing the best month for favorites covering the spread, in the super bowl era.

After the dust of the first 11 games settled, the books were headed to a Sunday bloody Sunday. Teams favored started the day 9-2 ATS, with the Patriots and Eagles who were heavy public favorites, covering the double-digit spreads. As the first set of games came to a close, the books were sweltering. The Patriots scored a late touchdown in the final seven minutes of the game to push the lead to 35-17, while the Eagles were cruising vs. the Bears. Needing a public favorite to lose, the attention of bookmakers turned to the Panthers vs. Jets game. Then, a fumble returned for a touchdown by linebacker Luke Kuechly and a late Graham Gano field goal, and Joe Public was eating filet mignon for lunch. The bookmakers did get some slight help with the Bills winning outright, and in the later games, the Cardinals upset the Jaguars. The savior to a horrible day for the books came in the Sunday night game, where the Packers came up short 28-31 but were able to keep the game close as 14 point underdogs.

Bookmakers have been extremely sharp when putting out totals. The over-under was 7-9 in week 12 and is 88-86-2 for the year. The Monday night primetime game went under if you got the number late (39.5) and -7.5. Many bettors were able to get in their wagers at o/u 39 and -7, Proving how valuable the half point is off the key number 7. Primetime games this year have been quite profitable for over bettors, sitting at 23-15( 60.5%) through week 12.

We are getting close to the end of the year, here are the Pre-Season Win totals according to Las Vegas Westgate Superbook for future wagers. 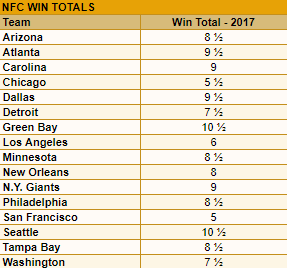 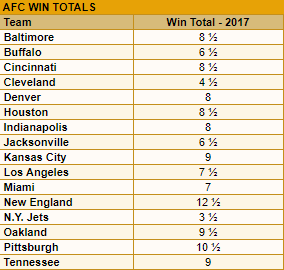 ESPN Houston's The Killer B's react to comments from ESPN Houston's John Granato about the Texans rebuild and the timeline for when fans can expect the team to compete again.