Jerry Bo: Beginner's guide to the 2018 World Cup in Russia

After four years of anxiously waiting for the most anticipated Sports event in the world, Russia takes center stage as the Host of the 21st edition of the World Cup.

The Number of countries that will compete for the most coveted prize in the soccer universe. One automatically qualified for serving as the host (Russia), the other 31 squads had to play through qualification to reach Russia. We will see 20 countries that were at the last tournament in Brazil 2014. We also welcome two first timers with Iceland and Panama making their first appearances.

The number of matches that are spread out over about a month's time consisting of a group stage, followed by knockout-stages. The top 2 teams from every group advance to the Round of 16.

The different number of venues that will entertain matches during this competition. Of the 12, Sochi, Luzhniki, and Yekaterinburg were fully renovated, while the other nine stadiums had to be built. It's reported that approximately $11.8 billion has been spent on hosting this World Cup.

Most of the cities involved in the tournament are just outside of European Russia or Western Russia. European Russia hosts 77% of the Country's population but only covers 25% of the entire territory. On this side, you can find Russia's two largest cities, Moscow and Saint Petersburg. The opening Match of Russia vs. Saudi Arabia will be played on June 14th at Luzhniki Stadium in Moscow. The Glamorous stadium seats 81,000 and will also be the setting for the Final match on July 15. 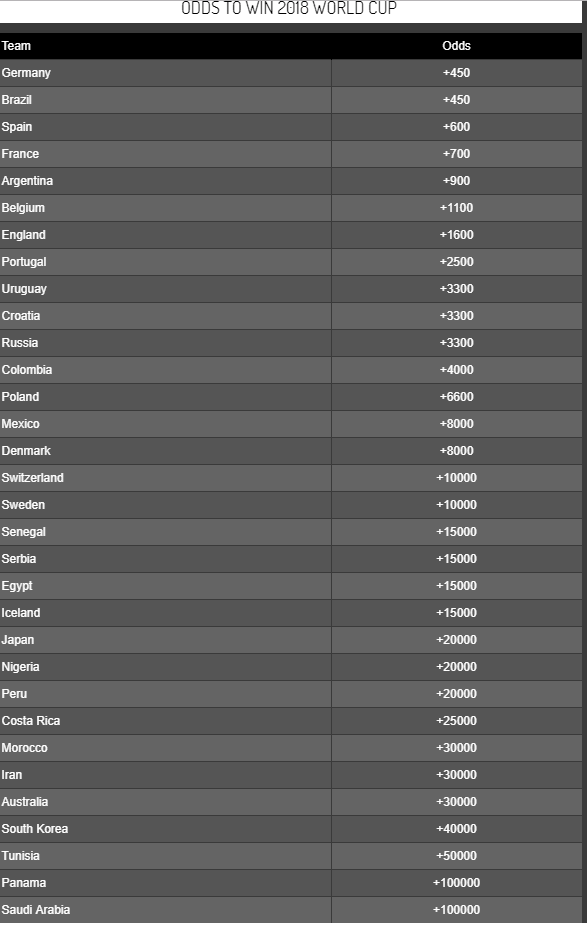 The co-favorites, Los Samba Boys, look to hold the FIFA World Cup Trophy for the sixth time. After a disappointing loss on home soil in the 2014 World Cup, the Brazilians look to bounce back, and their dreams start with the dynamic Neymar. The National No. 10, has been injured for the last couple of months but it's reported he will be ready by the start of the tournament. He has been shown practicing with the team already and him being the captain for Brazil's opening match looks very likely. Brazil torched the South American qualifiers, only losing one game leading up to Russia 2018. Look for the CONMEBOL giants be in the final four of this tournament.

The Defending World Champions come into this competition with a surplus of talent and depth at every position.  Die Mannschaft was able to lift the confederations trophy with virtually a team of reserves, so we know what they bring to the table at full strength. Only two countries have ever been able to claim back to back World Cup Titles; Italy in the initial days of the tournament in 1934/38, and Brazil in 1958/62. Germany will once again be the team to beat, and the return of Manuel Neuer would be huge as he was named to the preliminary 27 man squad but is still injured.

La Furia Roja come into this tournament as hot as any team and will be looking to repeat the magic of 2010. New Manager Julen Lopetegui has Spain playing more attacking football, and the results were 36 goals in the qualifiers while only conceding 3. Since taking over the national team, Lopetegui is undefeated with 13 wins, 5 draws, and an astounding +47 goal differential. Spain lacks a dangerous striker and will be relying on Diego Costa to work his wizardry. If they can find someone to give the attack pace, La Furia Roja could make a deep run in what will be Andres Iniesta's last run with the team.

A fan favorite,  Les Bleus arrive to Russia with as high hopes as any team in the field. Manager Didier Deschamps has the duty of taking his country to prominence once again, as they did in 1998 when he was a player on the national team. He would be only the third player of all time to win the World Cup as a player and a Manager. France has plenty of attacking options with the likes of Antoine Griezmann, Paul Pogba, and Kylian Mbappé to name a few. The problem for this team will be keeping opposing teams from scoring, a recurring problem France has had under Deschamps.

Rounding out the favorites, we have another fan favorite with the Albicelestes sitting at 9-1 to win their third title. The South Amercian Giants are led by no other than the world's best player, Lionel Messi. Argentina hasn't won the World Cup since 1986, and that was behind the alchemy of Diego Armando Maradona. Many locals believe Messi will always sit in Maradona's shadow until Messi can win the FIFA World Cup. The National No. 10 is 30 years old now, and this might be his last tournament with Argentina. Look for veterans like Gonzalo Higuaín, Sergio Agüero, and Angel Di Maria to help carry this team into the late stages of the tournament.

This is part one of a few articles I will be putting together for the World Cup, stay tuned for more…

For any questions or comments reach me @JerryBoKnowz on Twitter.

Examining the top prospects that should spark new hope for Rockets at No. 3 overall

Charlie Pallilo
The Rockets will select No. 3 overall in the upcoming NBA Draft. Composite image by Brandon Strange.

A year ago the Rockets were very happy to get Jalen Green at number two. After an awful first half of his rookie season Green came on like gangbusters. Had the Rockets finished second in Tuesday’s drawing, they were guaranteed to have access to either Auburn forward Jabari Smith or Gonzaga center Chet Holmgren as the second anchor piece of their rebuild. Instead at number three, six foot ten inch Duke freshman Paolo Banchero is the most likely Rocket selection. Nobody knows with any degree of certainty whose career will go how, and hey, maybe the Thunder takes Banchero leaving Smith on the board for the Rockets. But while Banchero is a fine prospect he is an athletic gear below the also six-ten Smith and lacks the unique upside of the seven foot beanpole Holmgren. With the Blue Devils, Banchero was a mediocre three point shooter and a mediocre free throw shooter. Maybe he was poorly coached! Obviously any 19-year-old’s skills can develop, but Banchero’s ceiling at this point is clearly lower than those of Smith and Holmgren.

Provided Holmgren and Green go one-two or two-one, if Banchero is not the pick at three it will be eyebrow raising but mean the Rockets opted to take a flyer on more athleticism. Think Purdue point guard Jaden Ivey, wing Shaedon Sharpe who did not play as a freshman at Kentucky, or least likely six foot eight Iowa forward Keegan Murray.

The Rockets have two picks in Round 1

In addition to the third pick, the Rockets have the 17th selection as the first useable asset (sorry Victor Oladipo) gained from the James Harden to Brooklyn trade. At 17 General Manager Rafael Stone will be chucking a dart at the board hoping to hit at least as well as he did at 16 last summer with Alperen Sengun. Sengun was fun to watch offensively and should be a solid rotation player, but he’ll never be a plus starter without at least a couple of terrific defenders on the floor with him. Sengun is simply too slow, and lacks the quick twitch muscles to ever be more than a mediocre team defender. Good small ball and spacing teams can play Sengun off the court. The Rockets’ defense was garbage this season with very little improvement shown as the season droned on. Either Smith or Holmgren would have been an immediate upgrade on that end over the shall we say, lethargic, Christian Wood.

The Rockets are in a challenging spot. They’re staring at a third straight season of NBA irrelevance, and their path to getting very good again is perilous. Jalen Green has the “wow” factor, but exactly nobody (nobody reasonable anyway) would prefer to have him going forward rather than Luka Doncic or Ja Morant. Doncic’s Mavericks and Morant’s Grizzlies are both in the Rockets’ division. So is Zion Williamson and New Orleans, though who knows if Zion will ever sustain good health and conditioning to fulfill his high-end potential. For the second straight season Oklahoma City was second worst in the West. The Thunder is armed with a proven quality GM in Sam Presti and holds much better draft capital than the Rockets in coming years, including getting the Rockets' first round picks in 2024 and 2026 unless they are top four picks.

When a team goes 17-55 and 20-62 in consecutive seasons it needs most things, including some good luck. That describes the Rockets in spades. They are a good bet to be lousy again in 2022-23. Owner Tilman Fertitta has acknowledged as much. A third consecutive losing season is extreeeemely likely. That will come after the Rockets had just three losing seasons total over the prior 36 seasons. If the Rockets’ 2022 lottery ticket doesn't pay off significantly, they’re staring at being NBA dreck for more than half a decade.