THE WEEK IN GAMBLING

He was 20-of-31 for 227 yards and three touchdowns and that is what the box score will read, but the story was the manner in which Russell Wilson manipulated his mightiest qualities.

According to Pro Football Focus, Russell Wilson was under pressure on 16 of his 36 dropbacks.  Although it has improved at times, the offensive line has had issues protecting the slippery play caller. Using football outsiders offense efficiency ratings, Seattle ranks top 10 in weighted DVOA, and much has to do with the ability of Wilson to improvise and create outside of the pocket. 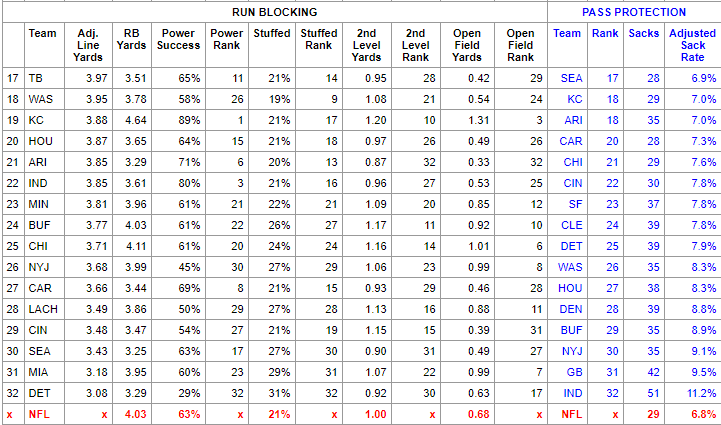 The Seahawks rank 30th in Adjusted line yards (3.43), only leading Miami and Detriot. The Seahawks have received nothing from the running back position where they average a wretched 3.25 yards per carry, well below the league average of 4.03.

The stat that has to stick out is that Wilson is second in the league in rush yards at his position. Wilson averages 6.1 yards per carry on 71 attempts only trailing Cam Newton. Even more fascinating, is his success on first downs. Of his 432 total yards on the ground, 189 have come on first down, while accumulating  22 first downs. In the fantasy world, he leads all Quarterbacks (ESPN Standard) in scoring with 279.4  total points, well ahead of second place Carson Wentz (254.5). Wilson is accounting for over 80% of his team's offense and has been involved in all but 1 of his teams 30 offensive touchdowns this year. The next four weeks will represent what this team will be as they have a tough stretch playing at Jacksonville, vs. LA Rams, at Dallas Cowboys, and the finale at home vs. the Arizona Cardinals.

From the Cashiers Window:

The Largest Favorite to cover was the Jaguars, as they beat up on division rival Indianapolis, coasting to a 30-10 victory easily covering the -10 point spread.

For any questions or comments reach me at @JerryBoKnowz on twitter.

With Hunter Brown proving to the Astros that he can be trusted coming out of the pen, we examine what this development means for Cristian Javier right now and moving forward.