Will Yuli Gurriel turn it around? A detailed breakdown of his linear swing

In this piece I will break down Gurriel’s swing, similar to how I broke down Kyle Tucker’s swing last month.  The two are great parallels, as Gurriel has a linear swing, especially compared to that of Tucker’s.

What is a linear hitter? I’ll get into that with the swing break down, but I can give you stereotypes of the linear hitter.  Linear hitters typically don’t hit for very much power (like Yuli) and they work gap-to-gap and rack up a lot of singles and doubles.  Linear hitters typically hit for high averages and are hitters with exceptional hand eye coordination that have great feel for the barrel.  On the Astros, Gurriel and Tony Kemp are linear, while pretty much everyone else is either rotational or a hybrid of the two. 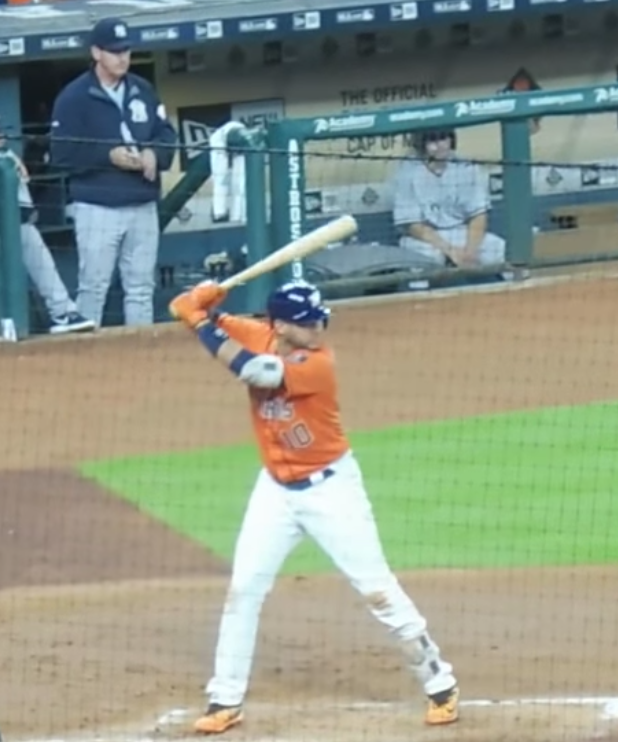 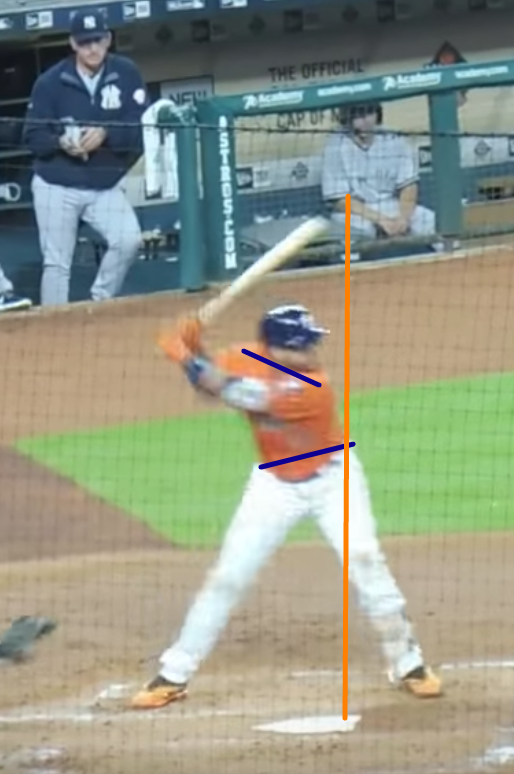 Here is Gurriel at foot plant.  The blue line across his shoulders is to show the downhill plane.  Linear hitters will always have this downhill plane at foot plant. Linear hitters believe in the “swing down” swing thought, which leads to a short swing.  The line at the hips shows the upward plane. This is also normal, and displays the rubber band effect you see in almost every good hitter. 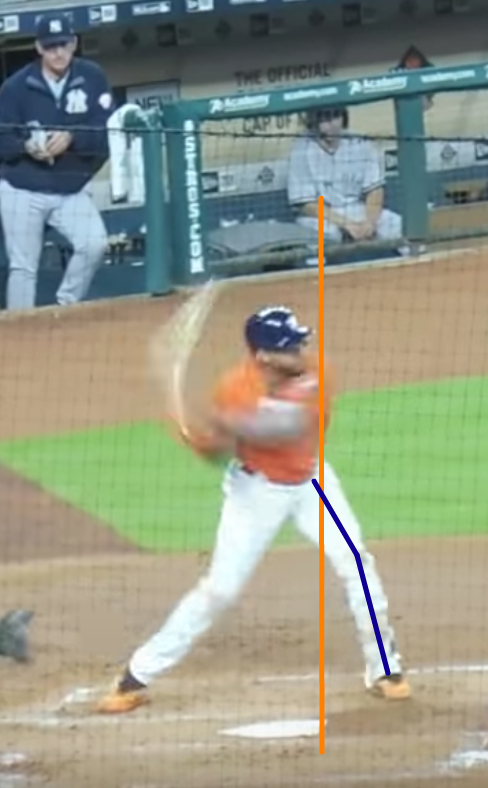 Here’s Gurriel at the next frame.  As you can see that front shoulder has continued to move forward past that orange line.  His front leg is bent, showing the weight transfer from back side to front side. 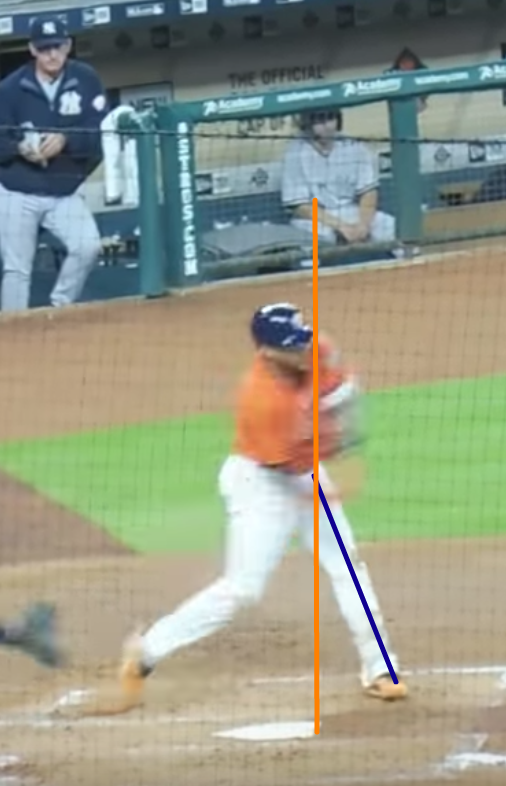 Finally, we have a shot of Gurriel at contact point.  We have another couple of frames forward, and you can see how Gurriel’s body has continued to ride forward towards the pitcher.  His front leg is locked out, which you will see in every hitter at contact, however if you look at his back foot, you will see it is actually off the ground.  Gurriel’s weight is on his front side, posted up against his front leg.

Gurriel lines this pitch directly to the second baseman for a lineout.  While the result isn’t what he wanted, this is the type of out you’ll see from him when he’s going good.  Linear hitters generally both try and are good at backspinning baseballs back up the middle and in the gaps.  When he’s going well Gurriel’s bat stays through the zone for a long time. This allows him lots of room for error, and it’s why a lot of his homers come on offspeed pitches that he’s fooled on but stays through the zone and hooks it over the fence on the pull side.

When he’s going poorly, as he’s been since the All-Star break, his bat doesn’t stay through the zone nearly as long, and you’ll see him rollover to the pullside on lots of pitches and ground into a lot of double plays.

Gurriel has started hitting some backspin liners in between the gaps recently, so hopefully he’s busting out of his slump, and if he begins to work back up the middle more consistently, he’ll certainly break out of it.  I wouldn’t be surprised if because of the injuries to Springer, Correa, and Altuve that he’s tried to make up for it and hit for more power, but his swing just doesn’t lend itself to that mindset. Because of his swing, he’ll never be the 20-30 homer guy that most first baseman are, but he’ll also usually be a safe bet to hit .300.

How the Houston Texans' latest hire could alter draft strategy

How DeMeco can cook up Texans success with Astros-themed ingredients

Charlie Pallilo
A lot can be learned from the Astros success. Photo by Richard Rodriguez/Getty Images.

As a fan what do you want most from your favorite teams in which you invest so much emotionally and sometimes financially? Sustained excellence and championships are certainly ideals, but short of those (or leading up to those) the most important thing for a fan to have is hope. For three years the Houston Texans have been a hopeless laughingstock of a dung heap, so any move connoting competence would be heralded. Here we are with the Texans’ hire of DeMeco Ryans as head coach. DeMeco was a fine hire. An excellent player over his six seasons with the Texans. A total professional. Smart. Seemingly universally both liked and respected. He brings a lot to the Texans’ table starting with a credibility injection of which the franchise has had desperate need. Quickie reality dose though. Breathless pronouncements about how awesome this masterstroke is aside, one thing DeMeco does not bring back to Houston with him: assurance of success, even as kind of a prodigal son coming home. Bart Starr anyone?

There's no substitute for talent

Back in 2020 plenty of people questioned the Astros’ hire of Dusty Baker. People like to complain. Dusty was a credentialed selection with the personality and resume to take over an elite ballclub in the aftermath of the cheating scandal. Two World Series appearances and one World Series championship later, even the harshest “the game has passed by Ol’ Dusty” sillyheads have to acknowledge that’s worked out fairly well. Dusty’s positives are numerous, but the number one positive he’s had as manager of the Astros? A helluva roster every year. The Astros could have hired Anita Baker as manager and made the playoffs the last couple years.

DeMeco Ryans isn’t coming on board to be the sage and experienced hand to steer a shipshape operation. DeMeco is charged with hoisting the NFL Titanic from the bottom of the ocean. So if DeMeco is to thrive over time in his new job, it’s time that General Manager Nick Caserio starts thriving in his job. It’s highly unlikely Caserio can do the job Jeff Luhnow did (and that James Click added to) in constructing the Astro juggernaut, but if Caserio is to look like more than a guy whose cart was fortuitously hitched to the Belichick/Brady wagon with the Patriots, he needs to get cracking.

DeMeco smartly commanded a six-year contract. Caserio is starting year three of his own six-year deal. So far, so bad, but with qualifiers. I thought of Caserio’s first year as a redshirt year for him. He inherited a decayed roster, salary cap ugliness, and no first or second round draft pick (thanks one more time Bill O’Brien!). That Caserio’s second year pretty much showed no improvement is not inspiring. In 2021 in finishing 4-13 the Texans finished 30th among the 32 NFL teams in points scored, 27th in points allowed. In 2022 in finishing 3-13-1 the Texans again finished 30th in points scored, again 27th in points allowed. That was not all about coaching, though David Culley was in waaaaaaaay over his head and Lovie Smith did what he did at his two most recent head coaching gigs (Tampa Bay Bucs, University of Illinois), lose a whole lot. How much blame for the poor head coach hires goes to Caserio vs. how much to Cal McNair?

The most brilliant chef can’t be asked to make a magnificent meal out of trash ingredients. With the Astros A.J. Hinch and Dusty Baker had/have USDA Prime rosters, Culley and Smith had mostly Ken-L Rations. Caserio now has draft picks galore. He needs to find his Carlos Correa or Alex Bregman, most specifically at quarterback. Caserio also has ample salary cap space. Time to add more than temp journeymen. What he no longer has are excuses. DeMeco clearly did stellar work as 49ers defensive coordinator, but it’s not as if he spun straw into gold. The Niners have plentiful talent. Robert Saleh DCed a couple fine units there before getting the Jets head coaching gig that enabled Ryans to step up. How’s Saleh doing as HC without a quarterback?

For years now the Astros have been the only major pro team in town worth a damn. In what is supposed to be “football first” territory how much cachet do the Texans reclaim and how quickly? For starters at least, DeMeco Ryans brings hope.

Have you found our new Astros podcast?

Stone Cold ‘Stros is the weekly Astro-centric podcast I am part of alongside Brandon Strange and Josh Jordan. On our regular schedule it airs live at 3PM Monday on the SportsMapHouston YouTube channel, is available there for playback at any point, and also becomes available in podcast form at outlets galore. Such as: